This Thursday will see Winton Life centre being transformed into a free art exhibition called Tell 5 which aims to spread the word about the ongoing conflict experienced in Palestine.

The event will be run by Youth & Unity, who aim to raise awareness of cultural issues and promote peace. The inspiration came from photographer Lizzie Godfrey, who had been taking photos for a book about Israel and Palestine. The idea is that if five people understand the issues raised, then they can tell five of their friends and the chain can go on from there. 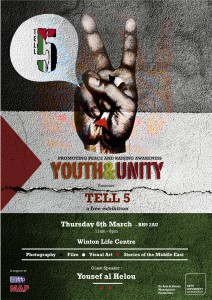 The event will take place from 11am until 6pm and will include special talks from Palestinian journalist, Yousef Al-Helou as he tells his story from the Middle East.

There will also be a wealth of displays in visual art, film and photography from Lizzie Godfrey, and Mohammad Abbas. As well as contributions from Bournemouth based artist Lizzi Hoar, Devon based weaver Gail Bryant, and an installation from 20 Spanish painters (Two Sides) who have created paintings from a Palestinian orchestra stimulus.

A piece from Scott Heleniak, a graphics student at Bournemouth Arts University, has been commissioned for the exhibition, he explained where he got his inspiration from; “The concept behind this typographical piece is that there is an ongoing rise on the people that are being pushed for every day, but they are being pulled back to the confinement and suffocation of being forced into ghetto living. The amount of political street art around Palestine that is spreading messages is a key part of keeping hope within the people. Street art is personal, raw and direct. It says, ‘I exist’ and ‘This is what I have to say’ in a huge variety of different forms. This was the form I chose, it resembles equality, freedom, peace and unity.”

Tell 5 is an art exhibition as well as an awareness campaign, and any money raised will be donated to Medical Aid for Palestinians (MAP).