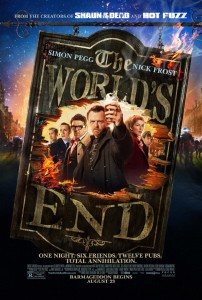 The truly mental finale of ‘Three Flavours Cornetto Trilogy’ with a hearty bite.

The World’s End brings Director Edgar Wright together again with Simon Pegg and Nick Frost in a truly mental finale but with a slow-pacing plot.

Gary King (Simon Pegg), a local legend (in his own head), reunites with his old school gang: Andy (Nick Frost), Steven (Paddy Considine), Oliver (Martin Freeman) and Peter (Eddie Marsan) to try and finally complete “The Golden Mile” pub crawl of 12 pubs. But in their childhood town, Newton Haven, nothing is quite that simple, especially when aliens are involved!

Simon Pegg has the greatest lines and brings much of the laughter to this drunken night out, while the others are merely supporting actors to display their relationships with Pegg’s character, Gary. However, Nick Frost and Simon Pegg’s bromance is present in The World’s End and is the core element in the film.

The World’s End does not have the same greatness that Shaun of the Dead (2004) and Hot Fuzz (2007) have. Even with the same plot DNA, it just lacks the brightness that the first films in the “Cornetto Trilogy” had.

The problem with The World’s End is that it is slow-paced, especially the start and does not get good until 30 minutes in. One of the highlights in the film includes a genius pub fight in which, Gary attempts to fight off the aliens without spilling his pint. Now that is a talent!

The World’s End is a film for the pub crawlers and lovers of the Simon Pegg and Nick Frost duo who can sit back and chill with the pint or Cornetto of their choice,  while Pegg and Frost kick some alien butt. They have grown up a bit since the first film in 2004 but The World’s End brings a hearty bite to the Cornetto trilogy.