Winton Armed Robbery: Police on the hunt for gun-wielding raider

By Tom Beasley and Chris Fay

Dorset Police are on the hunt for an armed raider following an attempted robbery of a betting shop in Winton. 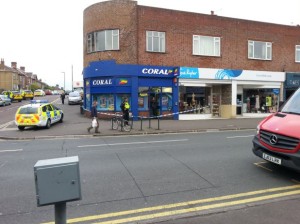 A number of cars, an armed response unit and a police helicopter were present at the Coral bookmakers on the corner of Latimer Road and Wimborne Road.

Detective Sergeant Andy Bell, of CID Bournemouth, said that there were two armed robbers and no money was stolen.

A Dorset police spokesman later said: ” A male entered the bookmakers brandishing what appeared to be a handgun. The male left empty-handed and disappeared into Latimer Road, possibly into a car.”

No one was injured in the raid.

Winton resident Jake Batchelor, 21, was on his way home from work and looking to place a bet when he saw the police tape.

He said: “I’ve never seen anything like this and I’ve lived in Winton for two years now.”

Police are seeking witnesses and anyone with information should call Dorset Police on 101, quoting incident number 336:22.

Four police cars in attendance. Officer at the door. http://t.co/nSr1z9TUrj