THE chairman of Age Concern Poole has called the rise in elderly people dying due to winter conditions “disgusting”. 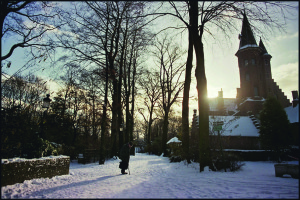 Bleak winter: Deaths among the elederly went up by a quarter in 2012 due to the cold © David Alliet

The figures released by the Office for National Statistics also show 480 pensioners died across Dorset in 2011/2012.

“We know that things are expensive but they are putting prices up far too much - 10%, 8%, that’s well above inflation. Perhaps we will learn the lesson when we see the figures at the end of this winter, which I think will be quite horrifying.

“It’s frightening, I know a lot of elderly people. I see about 200 elderly people a week. Most of them are okay but there’s a few we really worry about.”

The majority of the deaths came from cold-related illnesses such as heart attacks and strokes.

In recent months five of the six biggest gas and electric companies have increased their prices, sparking outrage from consumer watchdogs and charities.

This has led to the Bournemouth based charity, Dorset Community Foundation, launching their Surviving Winter Appeal, which aims to help those struggling to pay their heating bills.

Daisy Ilchovska, Campaign Manager at the Dorset Community Foundation said: “Unfortunately more and more elderly people are struggling with fuel poverty. The cost of heating a home has risen much faster than rises in the state pension and related benefits, which puts a lot of vulnerable people at risk as many elderly people choose to save money by turning down their heating”.

In five of the eight Dorset regions where statistics were collected there was a sharp rise since 2001 in winter related deaths amongst elderly people, although overall the county figure dropped.