Winter is coming this spring: Game of Thrones returns

Wars, dragons and White Walkers galore, season four of George R. R. Martin’s medieval masterpiece Game of Thrones has a lot in store for us this April. 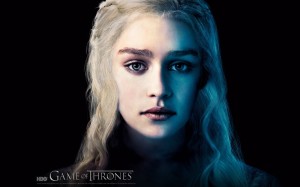 Game of Thrones likes to keep us waiting, a very long time. The last episode of season three aired in June last year and since then, we’ve had to quench our thirst for violence, nudity and mystical creatures by re-watching old episodes and reliving all the highs and lows of houses Stark, Lannister and Baratheon (to name a few). That was until the trailer for season four went viral.

The two minute long trailer picks up from where season three left off and shows the mythical land of Westeros in turmoil and ruination after the infamous Red Wedding. It also gives us frustrated fans a glimpse of where both our favourite and most despised characters are now; Daenerys Targaryen and her now grown-up dragon babies are poised to cause trouble in their campaign for the Iron Throne as brat king Joffrey prepares to wed the illusive and feisty Margaery in a lavish ceremony. As Daenerys warns, “they can live in her new world, or they can die in the old one”.

To further fuel the fires of our impatience, HBO released a “making of” feature that aired on the channel on the 9th of February (watch it here - warning, there’s spoilers for the older series). This video features interviews with some of the cast members as well as the main producers, giving an insight into the struggle of certain characters this season. Sound too morbid? Light hearted banter and on-set jokes play a large role in this promo piece too. A variety of new characters are also introduced for the season, such as Oberyn Martell, named as the “wild card”.

Now a date has been set. At 9pm on April 7th 2014, the HBO series will be gracing UK screens once more on Sky Atlantic. As creatures and houses collide, it appears that the reward for our patience will be one that is both great and gory.

Are you excited for the new season of Game of Thrones? How do you feel it will shape up in comparison to the books? Let us know in the comments!

I'm a budding author currently in my second year studying English. I hope to eventually get into the editing and publishing industry as I'm passionate about reading and books. I'm also interested in films, games and travel.