An open meeting by the Conservatives discussed the highly controversial wind farm due to be built on the South coast. 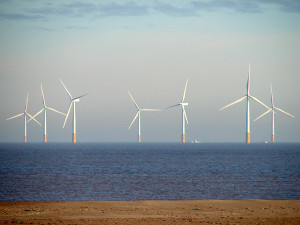 A wind farm in Skegness which lies about 5km offshore.

The development company, whose proposed wind farm is a joint project between EDF Energy and Eneco Wind, are planning to build between 136 and 218 wind turbines just off the South coast. It will be viewable from right here in Bournemouth; Christchurch, Isle of Wight, Swanage and Poole.

The panel at the meeting, which included speakers such as Councillor John Beesley, Mark Smith from Tourism Bournemouth and Ray Pointer from Poole & Christchurch Bay Association, urged residents to write to the company, whether for or against, in order to have their voices heard while the decision is still being made.

Andrew Langley, who heads a residential campaign group called ‘Challenge Navitus’ said, ‘I guess as an organisation of residents in the area, we’re concerned about the visual impact for one thing, that’s a very important aspect, impact on the tourism economy, the leisure industry which is obviously a very important economy in this area.’

A small amount of people from green groups, such as Transition Bournemouth and Friends of the Earth also attended the meeting, but left disappointed, adding that a balanced view had not been provided.

Susan Chapman, from East Dorset Friends of the Earth, expressed that the group was in support of the wind farm. ‘Well I do think we’ve got to really, seriously invest in renewables because our fossil fuel industry, well number one it’s dirty, it’s dangerous, it’s wiping out life on the planet and we’ve got to find cleaner ways of generating electricity, and this is a very good way to do that.’

Final decisions, following public and statutory consultation, will be made in 2015. If given the go-ahead, the wind farm is expected to be up and running by 2020.

In question of the opposition from residents, the company added, “Navitus Bay understands that a proposal such as this people will generate wide ranging views from a wide range of people. As a responsible developer, Navitus wishes to ensure that as much information as possible is available to all those interested in the proposals in order for individuals to come to their own conclusions. The extensive consultation process has been most recently demonstrated by their third phase of public exhibitions in eight venues across Dorset, Hampshire and the Isle of Wight.”

For more information on the project, visit their website here.