The white noise of television debates 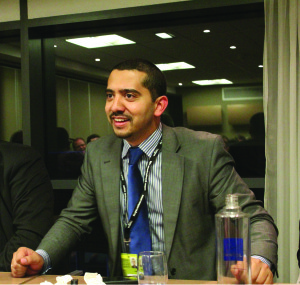 It has been hard to avoid primetime debating programmes recently. The runaway success of Channel 4’s documentary series Benefits Street has meant that figures like professional contrarian Katie Hopkins and Guardian columnist Owen Jones are eerily omnipresent on our screens. Whether it’s the traditional BBC sparring ground of Question Time or the hyper-active Big Benefits Row: Live on Channel 5, you’re never more than a few moments away from lots of noise about “taxpayers’ money” and “the last Labour government”.

Unfortunately, something has changed about these debates. Question Time has five or six panellists trying to get a word in, but many primetime shows insist on having studios full of people to call White Dee a scrounger.

This is a particular problem in the case of Channel 5’s recent Big Benefits Row and its follow-up on immigration. The word ‘row’ in the name of the show speaks volumes as a mess of vaguely famous television faces shout at each other whilst a cameraman whirls his kit around the tiny studio like he’s shooting a Paul Greengrass movie.

None of these stylistic shortcomings would be a problem if there was substance lurking in the debates. Presenters are pressured to pull microphones away from anyone who doesn’t talk in neatly crafted sound bites, and no-one actually gets to express their opinion.

It’s only Katie Hopkins who actually gets any screen time in programmes like these, with the bear pit mentality of the discussions perfectly suiting her. Whenever anyone disagrees with her, they are silenced in favour of the Hopkins brand of hot air.

There’s no room for the sensible voice of the Huffington Post’s Mehdi Hasan in these debates. In the space of the hours of discussion we have seen in the last month or two, nothing has changed.

No one’s opinion has been altered at all by the scrolling Twitter bile of @notracist87 or @TaxPayer001 and there is not a single human being on the planet who cares what Katie Hopkins thinks. The British public are being poorly served by political debate that favours bite-sized opinions over real analysis.

It’s little wonder that there is so much misinformation around welfare and immigration given that so-called ‘factual’ television only produces inane babble. We will never get a real dialogue by opening up the Pandora’s Box of reality TV pantomime. Opinions need to be given room to breathe so that they can be understood and challenged. Maybe then, finally, the residents of James Turner Street will be able to settle down with a cup of tea.