The White Bicycles perform in Bournemouth on debut tour

University students Matthew Howes, Ryan Nolan and Jack Curnow, known as The White Bicycles, performed in Bournemouth- Boscombe last night as part of their winter tour across the South of England. We caught up with them to find out how they are balancing their degree work with touring, and how it feels to be sleeping on strangers floors… 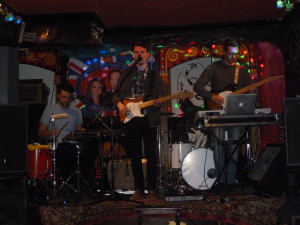 We found the guys waiting for their burgers at Wetherspoons down the road from their scheduled venue, The Chaplain’s & Cellar Bar, enjoying the local atmosphere. Currently studying in their third year at Falmouth University, The White Bicycles have also embarked on their Winter Tour in late November, making a stop here in Bournemouth on Monday. Ryan and Matthew, both studying music degrees, are enjoying the experience on the road and said touring is “more worthwhile” than sitting in lectures. The White Bicycles have “been friends since day one at uni” and are setting out to promote their new EP, Volume 1: Elegy, which was recorded over four days with the help of talent producer and friend, Beren Matthews.

The recent addition of Jack Curnow, a multi-talented musician who plays in another band with Matthew, has been a great success “Because me and Jack have sung together in the past we know that it works, it was an obvious choice.” Forming the band through friendship and sharing a house, the boys knew they were compatible as musicians.

Even though they are “still surviving on student loans”, so far the tour has been a success. The guys admit that despite always hoping to tour, they never predicted that it would actually happen, and in true tour style, the band confess they have slept on strangers floors and arranged to stay with friends of friends, and even these ‘friends’ aunties. How very Rock’n’Roll. But for after the gig, Matthew laughed, “We’re sleeping in a guy’s house that we’ve never met before.” and it sounds like they’re having a blast doing so.

With The White Bicycles’ manager, Joe Pym, having had experience at a London firm, the same company managing rising stars London Grammar, the band have a great sense of direction and focus. Matthew added, “We don’t have to worry about much because Joe has got it covered!”

When asked where the band would like to see themselves in five years, Jack retorted, “Hopefully not in spoons!” He jokes: “In an ideal world we’d be selling out O2 Academies across the country and I’d be driving my Aston Martin in my Hugo Boss suit.” Matthew interjected: “But we know we don’t play the right sort of music to be huge in the charts. For us it’s just about making enough money to do this for a living, I think that’s the same for most musicians. If we could just make enough money to rent a flat, eat well and afford to buy presents at Christmas we’d be happy.” Ambitious, we like it. 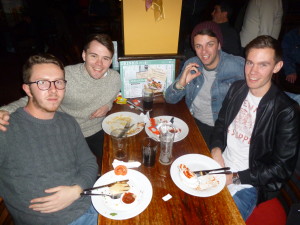 The guys enjoy their meals at Weatherspoons
Copyright to Sarah Tijou

Refreshingly independent, the band are releasing the EP on their own label, Pedal Pop Records. The band talked about spending a huge amount of time on making everything look professional, using the art students and resources at Falmouth uni. Surprisingly, Ryan said: “We aren’t interested in signing anyone else”. Pedal Pop Records are a way for this indie - electro band to save money with production and in releasing their own music, so take note fellow musicians.

In terms of genre, the band mentioned they did not always have their current, distinctive sound. The White Bicycles echo elements of The Maccabees, The XX and Frank Ocean, they said they “gradually moved towards this style of music” and that in sharing similar individual music tastes, they are “on the same wave length.” Matthew added, “The sound came around organically”. This ethereal, totally relaxed indie-electro sound is something differing greatly from the other acts on the night’s bill, here at The Rock we have decided we like. We like very much!

We asked the charming uni lads if they ever get nervous before a show, Matthew began: “I went through a stage of not getting nervous, it wasn’t arrogance, I just got excited instead.” Jack added: “I’d be really annoyed if I did something wrong. Last night was the most confident, I find it goes in waves.” Overcoming the seemingly non-existent nerves, The White Bicycles enjoy a drink to calm any pre-gig jitters. As the guys finish the last of their meals, Matthew told us: “The first couple of days on this tour I was absolutely bricking it, I don’t know why. But now we’ve done a few dates we know it inside-out so it shouldn’t go wrong. But it’s good to be nervous.”

The Band play all their own songs, from ‘Volume 1: Elegy’, and although they have done covers in the past, Lana Del Rey’s track ‘Video Games’ being a popular choice, for now it is just the Elegy tracks. 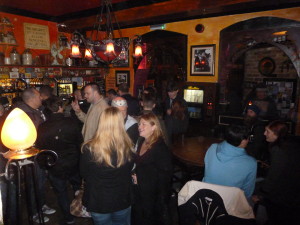 When asked who the band would most like to tour with, Ryan, after finishing a hefty mouthful, said “Frank Ocean. Or artists like London Grammar or Lorde.” Onto the subject of festivals, in which The White Bicycles have played at a number of including Boardmaster’s, Matthew said, “I’d like to play smaller festivals, like Green Man or Beacons” whilst Ryan, mid-chew, just nods. “I’d really like to do Latitude,” said Jack.

We left the band to enjoy the last of their meals and met them again at the Cellar bar. Their performance was well received, sparking interest from everyone in the venue with their spellbinding, rather mesmerising music.  We expect this success on tour to continue, believing they definitely have the potential to go far, making The White Bicycles ones to watch!