Weekly Events: Get Satisfied Is Back

After a much needed Christmas break, students of Bournemouth University returned to The Old Firestation to celebrate the notorious house music event Get Satisfied’s tenth party. Long-time respected house and techno DJ Joris Voorn, alongside  Get Satisfied’s resident DJs, played to a packed venue. 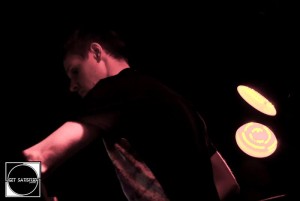 On the 10th March 2012, house music event ‘Get Satisfied’ had their début show at The Old Firestation. Those students had attended what would soon be one of the biggest house music events in Bournemouth. Beginning two years ago and already presenting some of the biggest names in the industry, such as Huxley, Dusky and Eats Everything, the event has become a huge success, selling out on almost every occasion.

Get Satisfied returned to Bournemouth in the new year with their tenth party, inviting students and house music fans all over to see DJ Joris Voorn. The event, held on the 10th February, did not disappoint.

After performances from resident DJs Bowler and Jack Light, DJ Joris Voorn was warmly welcomed by the crowd. Joris Voorn, a Dutch DJ who resides in Amsterdam, is seen by many to be one of the most respected in the house music genre. As well as part-owning Amsterdam record labels ‘Rejected’ and ‘Green’, he has also created his own house-style genre which is similar to that of Detroit Techno. Between 2009 and 2010, the DJ’s popularity grew significantly, with the song ‘Sweep The Floor’ gaining huge commercial success and even becoming the Ibiza anthem of 2009.

After an hour and a half set by Voorn, who played a variety of songs from his two albums, set of singles and his much loved remixes, the crowd eagerly awaited the final set to be played by Get Satisfied’s event manager and biggest resident DJ, Gareth Sutcliffe. With cheap drink deals and feel-good music, The Old Firestation was still buzzing when the event finished at 4am.

Speaking to several students who attended the event, including Callum Dunk, a first year student at Bournemouth University, it seemed the night was a huge success. “I had this night planned for a long time as it was for my birthday night out, I had loads of friends down and everyone had a mad night. [It was] crazy” says Callum. Joris Voorn himself also commented on the night saying, “Thank you Bournemouth for a great night!” The event is only set to get bigger and better.

What’s on next?
February and March are set to be a blinding two months for house, electronic and techno lovers in Bournemouth. Get Satisfied is back on the 8th March with their 2nd Birthday party, where you can expect to be partying with the likes of Joy Orbison and Boddika.

Jaguar Skills are playing on Valentine’s Day at Halo, then DJ Huxley is returning to Bournemouth to play The Old Firestation. Finally, TREATMENT is back on the 7th March with SKREAMIZM (featuring Skream, Hot Since 82, Justin Martin, Hannah Wants and more).