After a massive sell-out event in 2012, the Annie Mac Presents tour returned to Bournemouth for the second time, with radio DJ Annie Mac bringing along some of the most popular current house DJ’s including Duke Dumont and Cyril Hahn. 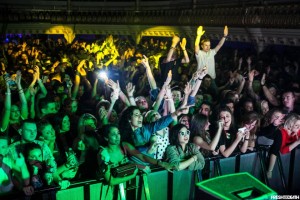 View of the crowd at AMP tour in Bournemouth © freshtodeath

The AMP tour, where DJ Annie Mac brings the latest contemporary dance DJ’s along with her to tour the UK, visited Bournemouth on the 15th November. She was joined at the O2 Academy in Boscombe by DJ Duke Dumont, DJ Cyril Hahn and singer Lulu James.

With house music becoming increasingly popular over the last few years, the event was sure to sell out.

First to play was Lulu James, a 21st Century soul singer with a slight electronic edge. Although Lulu James herself is not essentially a house music DJ, she proved to be a huge hit, with the crowd already going wild at midnight.

Next to play was Cyril Hahn, a thriving house DJ who became popular with his remix of Destiny’s Child hit “Say My Name”. Annie Mac then graced the stage around 2am to perform a blinding set, where she played a variety of music stretching from recent house tunes to old school drum and bass. To no surprise, the crowd went wild when Annie Mac played the UK number one single “Look Right Through” by MK and smash-hit “When A Fire Starts To Burn” by Disclosure.

After an amazing 2 and a half hour set by Annie Mac, Duke Dumont, who was joined by singer and DJ Mnek, played until 5am seeing out many students and house music fanatics with his well-loved dance hits.

The Bournemouth gig was a huge success, with Annie Mac herself tweeting “I danced loads [tonight] and I never dance when I DJ! Thanks Bournemouth”. The concert was also clearly enjoyed by those who attended, with Vanessa Mundy, 20, who went to the event, saying “[it was] definitely the best event I have been to since living in Bournemouth, the atmosphere was incredible”.  The Annie Mac Presents tour is now on its final leg, with Leeds and Dublin still to be visited.

For those who have a taste for commercial, underground or electro house, Bournemouth has a number of DJ’s set to visit in late 2013. Keep an eye out for Dark Sky and DJ Barely Legal (BBC Radio 1xtra) playing at Halo at the end of this month.