University handball side in narrow miss 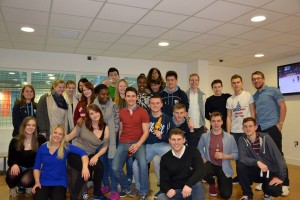 Bournemouth University’s handall teams were more than a match for their opponents ©S.Dewdney

Handball is a sport that may not be familiar to many, but that could be set to change – at least here in Bournemouth.

The university now has men’s and women’s sides who have competed at national level after teams led by Great Britain player John Pearce took part in the national championships last month.

The teams, which were only set up at the start of the academic year in September, have progressed from a group of largely novice players to sides who can more than hold their own against opposition who have vastly superior competitive experience.

Although most popular in continental Europe, handball is a fully recognised Olympic sport played all over the world and is becoming increasingly common in the UK.

The Bournemouth teams were set up by Pearce as part of the ‘Free Your Fitness’ programme (see page 20) which aims to promote the growth of sport at grass root level at low or no cost.

Pearce said: “Having come back from London 2012 and played abroad for five years it was great to try and set up a handball team here in Bournemouth.

“I’ve been working alongside England handball and the University Activators program and the idea really has developed from a small turn up and play project to creating two full teams to compete at the University national championships.”

Last month both the men’s and women’s teams travelled to Sport House in London to compete against other universities on the national stage.

Both sides played well above expectations with the men’s team narrowly losing to last year’s champions, the University of Essex, 5-4 in the decisive match.

A victory against Brunel University and a 4-4 draw with the University of Kent had given them confidence after two defeats to Brighton and Southampton but going down to Essex meant the team didn’t qualify for the main tournament.

Despite that, Pearce was still more than happy with the results. He added: “This really was an outstanding achievement from all those involved. The guys’ team made it to the play-off round and lost by one goal in the closing seconds.

“All the teams at the nationals had years of playing experience with a number of foreign students playing for them.

“For BU after just five months to get two squads out to the national championships - both men’s and women’s - was a massive achievement. I really look forward to what the future holds for BU Handball.”