The Student Union at BU has initiated a new poster campaign urging students not to start renting yet. 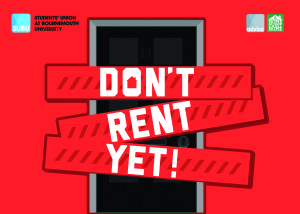 Year upon year the Student Union hear horror stories of first year students who are jumping head first into housing contracts but lack understanding of the complicated process when renting a house.

The Union’s new campaign ‘Don’t Rent Yet’ aims to stamp out the misleading assumptions students make when attempting to find housing in their second year and make available suitable help for students who are struggling with any housing issues.

Annie Hall, Vice President of Communications for SUBU, instigated this campaign and aims to stop the annual stream of first year students who are potentially jeopardising their money and ignoring the dangers of entering into problematic contracts.

Annie said: “SUBU Advice experience students coming in with problems with housing contracts every year which they largely believe could have been avoided had students taken the time to think a little bit more carefully about the contracts that they sign.”

Annie acknowledges that the renting business is completely market driven and  ‘scaremongering’ among first year students is forcing them to seek housing much earlier than recommended. She said: “If students were to wait till the other side of the exam period in January, they’re less likely to find themselves in these situations.”

For part of the campaign (above), SUBU has warned students about believing some myths surrounding renting. Students are being told to understand that not all the best housing will be gone after Christmas. They should also be aware of the dangers of entering into a contract too early and the risk of renting a house before really knowing their housemates.

Annie stressed in particular that rushing into renting has ‘financial consequences’ and will cause ‘general stress’ for first year students who should be concentrating on their course.

First year journalism student, Amy Poduval, 19, has already put down a deposit for a house in Charminster. She said: “My reasoning is that because so many first year students have all rushed into renting and finding houses, you are almost forced to rush with them.” Asked whether the ‘Don’t Rent Yet’ campaign had an impact on her decision to rent so early, Amy said: “The campaign did bring to my attention the financial risks but we were more focused on getting a house that we really wanted.”

Though Amy does not regret acting so early, she acknowledges the pressure put on students looking for houses by estate agents. She said: “I think the estate agent did pressure us. He really emphasised how fast the houses were selling and we felt the pressure to pay a deposit at once.”