UKIP should feature in 2015 election debates 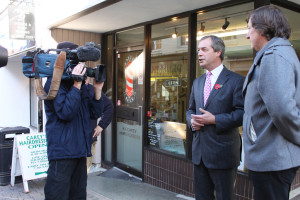 UKIP have stormed British politics in 2013; so surely they should have a place on the pre-general election debates in 2015?

To some, UKIP are seen as a joke political party devoid of any policy which could stand up to scrutiny, and certainly not government material. But to many, they are a genuine opportunity to have an alternative voice in Westminster to the political staleness currently engulfing British politics.

The race to May 7, 2015 – a.k.a. the 2015 general election – has long since kicked off, and the issue of having televised debates between the party leaders prior to polling stations opening is continuing to rear its head.

In the first debates – held prior to the 2010 general election – only the big three parties we invited on. David Cameron representing the Conservatives, Gordon Brown representing Labour, Nick Clegg for the Liberal Democrats… but no Nigel Farage representing UKIP, so should he be in these ones?

Their public support has grown and – despite the critics – are a genuine contender to win seats in the Commons. In the local elections, the ‘fourth party’ gained 139 councillors, only second in gains to Labour (291).

Polling is also showing that they are challenging the Lib Dem’s for a place in top three. UKIP were above them in four of the six polls’ most recent version (YouGov, ComRes, Opinium, Ipsos-MORI). With this in mind, you would think Farage would be given a platform to lay bare – and have dismantled – his manifesto.

This would provide a golden opportunity for Cameron to claw back some of those who have already jumped ship from H.M.S. Tory. For once, Farage would have to face the scrutiny which UKIP policy deserves, rather than floating on the crest of the anti-EU wave.

Though it is easy to see why Cameron would not want a small, alternative party to take part in the debates. You only have to cast your mind back to 2010. Before Nick Clegg was the deputy prime minister – and had alienated himself from every future university student in the country – he undoubtedly dominated the debates.

Clegg offered an inviting alternative to the distant Etonian Tories and a Labour party which had seen the British economy nosedive under their watch. The success in the debates had gained the Lib Dem’s enough power to get a seat at the coalition cabinet table. What would stop the same happening to UKIP?

But why should UKIP be given a stand when they have no sitting MPs? Both Natalie Bennett’s Green party and the Respect party have MPs sitting in the House of Commons (Caroline Lucas & George Galloway respectively). Why should they not be invited to participate in the debates?

On that thought, what about the SNP – if they are still a part of the UK in 2015 – or Plaid Cymru? Britain and it’s constituents are made up of more than just English citizens and in the other countries of Britain the big three have less influence and representation.

The simple answer is practicality. It would be impossible to get anything meaningful out of a debate with that many parties.

Regardless, the influence and support which UKIP have amassed over the past year warrants them an invite, even if it is just to finally shine a light and scrutinise the policies of Nigel Farage – providing Cameron doesn’t get his way and the debates do go ahead.