Thor: The Dark World is action packed and full of heart pumping emotions of rebellion, rage and revenge. 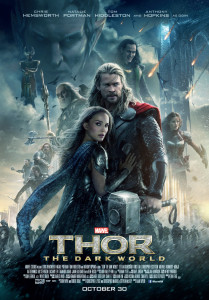 Thor has restored peace to the Nine Realms and Loki is imprisoned for his crimes in The Avengers Assemble. But round the corner lurks the Aether, a powerful energy that brings Thor’s love interest, Jane Foster, to Asgard and the Dark Elves, a race that will stop at nothing to get their hands on it and turn the universe into a new realm of darkness.

Thor (Chris Hemsworth) and Loki (Tom Hiddleston) show is back and in full force, the darkness of it all is impressive and powerful and brings the ultimate duo together to fight the leader Dark Elf, Malekith (Christopher Eccleston).

With Alan Taylor as the director, who brings Thor to a darker place and high-staking action compared to the first director, Kenneth Branagh’s charming and cheesy film. There is still a little humour to bring the intensity of the film down a notch and the love connection between Thor and Jane Foster (Natalie Portman) brings warmth to the audiences’ hearts.

Thor: The Dark World does mess with the audiences’ emotions. At one point, the adrenaline is pumping and then suddenly those characters’ demises pull at the heartstrings. If you are not even a little upset by their downfalls then you must be cold hearted as Alan Taylor portrays them in such tenderness and elegance.

Hemsworth’s muscles do have a 5-second feature, for the ladies, but that aside, his acting is impeccable as Thor and brings the character to life.

Hiddleston steals the show and as the God of Mischief (when he misbehaves, he really does misbehave). His fandom, Loki’s Army and Hiddlestoners, also brought Loki to life by their attraction to the character. Who can forget 2013′s San Diego Comic Con. Loki’s God-like nature is put to the test: “Humanity, look how far you have fallen…” and when Loki puts his finger to his lips, the crowd went silent…Loki we bow to you!

Loki will not feature in the new The Avengers: Age of Ultron but his future seems bright with his rising success and dedicated fans. He certainly is ‘Living La Vida Loki’.

Other stars that bring this movie together are Anthony Hopkins, Idris Elba, Stellan Skarsgard, Adewale Akinnuoye-Agbaje, Zachary Levi and many more.

Thor: The Dark World is a must-watch film and no matter what, Marvel will always have the hearts of many and be the franchise that brought  stardom for so many actors. Marvel, we salute you!