The Other Woman Review

The Other Woman is so hilarious and proves that Leslie Mann’s comedy is in a league of its own. 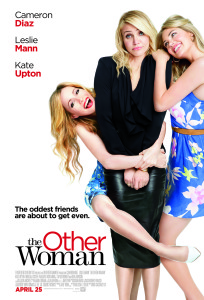 The Other Woman is a chick flick that can be cliché and unrealistic. However, it is full of fun and genuine laughs.

Carly (Cameron Diaz) believes she has finally found the love of her life, until she meets the woman who snatched him up first, his wife, Kate (Leslie Mann). The two become unlikely friends and team up with yet another of his unsuspecting lovers (Kate Upton) to get their collective revenge.

Director Nick Cassavetes – who is known best for the epic tearjerkers like The Notebook (2004) and My Sister’s Keeper (2009) – should stick to what he knows best, making us cry than laugh. The unrealistic nature of the film is its downfall.

The Other Woman is a modern version of the phenomenal classic The First Wives Club (1996) with a raunchier and edgier twist.

The girls are a hilarious bunch but Leslie Mann is in a league of her own when it comes to comedy. Cameron Diaz and Kate Upton’s performances are just as fun but Leslie Mann has an incredible talent that shines throughout the film.

Nikoolaj Coster-Waldau (famous for being on Game of Thrones) is the cheating husband and is the target of the audience’s laughter. The women in his life decide to get their revenge by giving him hormonal tablets, dosing him with laxatives and tricking him into washing his locks with hair removal product.

Nicki Minaj has her moment in the spotlight too as Carly’s no-nonsense assistant. Well, let’s just say her backside has more of the spotlight than her acting.

The Other Woman is the perfect chick flick movie for a night in with the girls, braiding each other’s hair while drinking Cosmos.