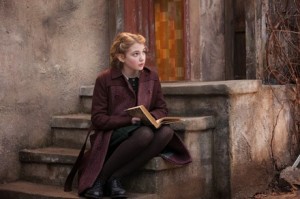 In 1938, After her younger brother dies on a train journey to the home of their new foster parents, Death (Roger Allam)  is intrigued by Liesel.

Hans discovers that Liesel has brought one book - a stolen book, which she cannot read. He helps her to learn, and Liesel becomes obsessed with reading anything she can lay her hands on. Unfortunately, this is Nazi Germany, and war breaks out soon after Liesel arrives.

Books are being confiscated and burned, and Liesel is determined to ‘borrow’ what she can from wherever she can.

One night, the mysterious Max (Ben Schnetzer) arrives at the family’s home, and reveals he is a Jew and needs a place to hide. Unable to leave the house, he joins Liesel in her voracious reading, and further teaches her the power of words.

Sophie Nélisse is captivating and touching as a little girl hiding big secrets. Geoffrey Rush is lovable, and Emily Watson wonderfully portrays a woman trying her best to be hard-hearted but warming to the strange little girl in her home. Nico Liersch, as the ambitious but reluctant Rudy, adds a touch of humour to this sombre film.

This is not a brash, loud war film. One of the most striking things about this film is the quiet - quiet music, quiet voices, and quiet glances. Heaven Street is in the middle of Hitler’s rule, and everything has to be a whisper, for fear of saying the wrong thing. The suppression and the anxiety is palpable, and the omnipresent threat of Death adds to the tension.

This is a view of the war from the eyes of one little girl, from one little village, with the only hints to the wider effects coming from Death’s teasing remarks (“No one was able to serve the Führer as loyally as me”) and snatched shots of the newspapers Liesel smuggles.

With sweeping snowy landscapes muffling the sound further, and the family struggling for food in their little house, The Book Thief is a film that is bleakly beautiful.