Syria: why we should intervene 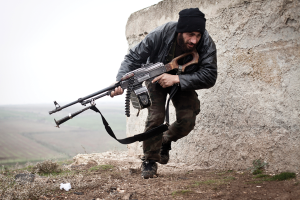 Preparing an intervention in one country based on the outcome of another generalises the circumstances and effects of a civil conflict.

Quite frequently, the impact of an intervention in Syria is placed on a playing field alongside the Iraq war, whereby the aftermath is generalised as an economic disaster.
Firstly, how can we possibly put a price on the life of masses of innocent people? Secondly, why has help for Syria been tainted by the failures of the Iraq war?
I am not ignorant to the consequences of the inevitable clashes it causes when a western democracy infiltrates a Middle Eastern country. The collision between moral and social ethics makes for an inevitable act of violence.

The underlying point here is that the Muslim world has many conflicts and tensions in its history, especially with the political revolutions of the Arab Spring.
The West can never understand the cultural politics of the East fully, and perhaps in this situation many argue to let Syria determine its own destiny.
However, I cannot shy away from the grim statistics of 110,000 people dead (Huffington Post, 2013) and 2 million people (UNCHR, 2013) who have become refugees.

Personally, I do not think a military intervention should be aimed at the punishment of Bashar al-Assad; rather at creating a universal message to any other leader planning to use chemical weapons or massacre their people.

No, military force is never the ideal approach to such a delicate issue. However after the failure of a peaceful intervention, more drastic measures should come. You can argue that in a somewhat recessive culture a peaceful intervention is by no means possible: a leader capable of slaughtering his own people would show no mercy upon an outsider. Intervening could then result in empowering radical jihadists which would increase the death toll.

This is where somebody usually brings in the argument; ‘What about our soldiers dying over an issue that was not ours to begin with?’.
I agree that any man’s life is no more superior to another’s. But if a country decides on political empathy to invade, as harsh as it sounds, troops know what they are signing themselves up for when they give their life to the army.
Though is it just about the few men we send into Syria? Iran is a strong ally of Syria and Bashar al-Assad, who have support from both Russia and China which spreads outside votes in the United Nations Security Council.

It took one assassin to kill Franz Ferdinand which set off a chain of events that led to World War . We should question whether or not a small civil war controlled by military intervention could escalate into World War III.
Furthermore, if we get involved with Syria now will we find ourselves trapped in finding an entirely new political order? Does it put pressure on us to help in every single civil war to come? Are we using this humanitarian crisis as an excuse to exert power upon a vulnerable country?

How would we feel is Saudi Arabia were concerned over the UK’s trident, and felt it was necessary to disarm us? Are we peacemakers? However, a domino effect of genocide will occur if we simply ignore global atrocities. One massacre will lead onto another, creating a chain effect for the unfortunate, defenceless people of Syria. I don’t know what intervention will look like, whether it is peaceful or military. I am seeing what non-intervention looks like and I do not know which is worse.