The second longest running Pay-per-view (PPV) from the WWE Survivor Series aired this past Sunday. There have been some rather bland story developments with repeated feuds and matches on RAW overshadowing the PPV. However, WWE still provided a solid and entertaining show.

Kick-Off: Kofi Kingston vs The Miz This was a surprisingly solid start for the PPV. Whilst this feud was hastily rushed together a week before the PPV, the two put on a very pin heavy but technical match with Miz taking the victory. I think it’s clear this match was intended to show upper management that these guys could excel higher up the card, especially Kofi who has been stuck in a mid-card rut for far too long now. It’s not clear whether this feud will continue but the final slap by Kofi may be suggesting a continuation. A great way to start off the PPV and can be viewed for free on youtube here, provided by the WWE themselves.

Traditional 5 on 5 Tag Team Elimination Match: The Rhodes Brothers, The Usos and Rey Mysterio vs The Shield and The Real Americans 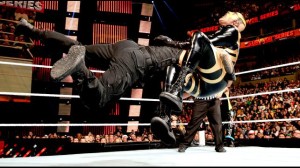 Definitely the show stealer of the night. A fantastic match throughout with some entertaining spots. Rey Mysterio’s return had a lot believing that this would be a guaranteed Face victory but lo and behold, the Heels took the win. Every one had a great moment to remember in this match from Goldust’s moonsault homage to his brother, to the double giant swing by Antonio Cesaro. Despite great performances by all it was Roman Reigns who came out as MVP, taking out 4 of the opposing team at a 5 vs 2 advantage. His spears looked deadly and came out of nowhere every time. There have been rumours going around of The Shield splitting and I’m suspecting this performance is to peg Reigns as one who will set himself adrift. Definitely worth the price of admission, even for Zeb Colter “twerking” alone.

Not much to say about this match other than it was a solid affair with Big E retaining. Personally I believe his title win on Raw was a better match but this rematch remained engaging. Big E will excel as a powerhouse even if his mic skills do still need some work. I look forward to seeing how far Big E goes with this push.

This was an average Divas match with the odd entertaining moment spattered throughout. It seemed like they really wanted to rush this one by, so there were some very quick eliminations. The WWE keep trying to push the Total Divas as faces yet they seem to be acting more like heels every day. The divas division has been in a bad state for a while now but at least this match did show some occasional technical prowess throughout. The best moment had to be when Eva Marie got eliminated and we didn’t have to watch her wrestle any more. That girl is seriously terrible.

It was clear John Cena was going to win and, unfortunately, this left us with a rather bland match. Alberto Del Rio is an excellent performer that made proceedings at least somewhat entertaining, but Cena’s continued efforts to finish his set menu moveset left the match feeling very lopsided and tedious. It’s impressive John Cena has returned after his injury so quickly, but I wish his move set was back as “even stronger” as he claims to be. 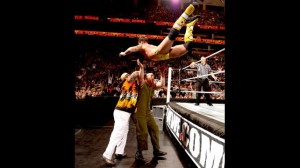 This match was a slow starter, but picked up to be a really great match. CM Punk and Daniel Bryan are a dream team to a lot of people and, although I’m still sore over Bryan being taken out of the WWE Title race, seeing these two together does make the little fan-boy excited. The Wyatt Family aren’t the most technical of wrestlers, but they did serve as good antithesis to Punk and Bryan’s fast and frantic offence. Add to that the fantastic CM Punk dive to the outside stage and you have a fantastic penultimate match up for the event.

A very underwhelming end to the show. I really don’t think anyone was really invested in this feud nor could deny the outcome. It tried to have a few stand out moments but the whole match felt sloppy and without any real investment in either party, it came off flat. It really does show how out of touch the WWE is, this feud already happened this year and no one cared for it then either. The match ended with a “look over here” distraction by the Authority that felt like something that should have been on Raw, not on a PPV main event.

The only question that remains is what Cena coming out at the end meant for the future. I really hope it isn’t a generic feud between the two because that will just solidify how out of touch the WWE is. My hope is that the long rumoured Cena heel turn is on it’s way and will culminate in a title unification match where Cena joins the Authority. The titles desperately need to be unified at this point and a heel turn by Cena would really shake up the boring rut WWE has found itself in once again.

Solid PPV. Nothing ground breaking, but definitely more entertaining than any of us hoped would come out of the recent set of story lines.