Volunteers were challenged do Random Acts of Kindness around Winton today as the last event of Student Volunteer week.

Students Union Volunteering President, Chloe Schendel-Wilson, said they were inspired to run this event by other people doing the same thing. 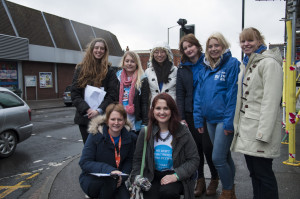 “The NekNomination craze is going around, but then people started changing that into RAK-nominations, so instead of filming themselves downing a pint they would film themselves doing something nice. There was a South-African girl who gave food to a homeless person and we just decided this would be quite a nice idea to improve the community,” she said.

The volunteers were given a list of actions to complete in four hours. These will be filmed and posted on Twitter hashtagged as #dosomethinggood. Those who manage to do the most Random Acts of Kindness will be given an award at a ceremony in the Loft at 6pm this afternoon.

Rebecca Bolton, a student project leader currently in charge of SUBU Conservation Rangers, also took part in the Shine Bournemouth event. She said she got involved with the volunteering week because she wants to “make a difference”.

“I want to promote the fact that the University does good things, and help the community. A lot of people have a negative opinion towards students so it’s nice to try and change their attitude,” she said.

Sunny Fu, Volunteer administrator, said the volunteering week has gone “really well”. She was pleased with the number of people who has helped out with the various events, and said she “hopes this gives them a taste of how good volunteering feels”.

She said: “The most important thing is helping other people. I wasn’t expecting that myself, but when I started volunteering I got this really good feeling after doing something nice for someone, and that’s what we want to get through.”

The article will be updated after the awards ceremony at 6pm.