Bournemouth students have collaborated with Walker Agency to launch a digital advertising campaign for SMINT UK. 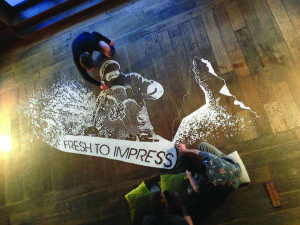 With the SMINT UK brand shying away from a hard sell campaign, Bournemouth-based agency Walker decided to get BU and AUB students involved with the creative project.

The agency and the students worked together on March 24 to produce the featured image built by laying out individual smints.

George Barlett, studying advertising at BU, was one of the participants involved with the venture.

He said: “The collaboration was about celebrating creativity and the agency thought it would be a great idea to get local creative students involved.

“It was a long day meticulously placing 32,000 Smints but a phenomenal piece of art came out of it. At the end of the day, it’s the little things that make the big picture and being able to look at the finished product and think, ‘We did that’, was worth placing every Smint.”

Another student who was involved with the event was Tamsin Raine who said the day was ‘mesmerising’.

“It was inspiring to work with such passionate people, and the results where simply fantastic. I hope it inspires other creatives to challenge their talent and abilities like it did with myself,” said Tasmin.

A video of how the work was put together is available on our website. Visit www.bournemouthrock.co.uk to watch.