Growing up in Norway, the winter Olympics have been a huge part of my life, where parents would “work from home” in order to pay attention to the games, while every front page showed a new victory from yesterday’s competitions. My first games abroad made it clear that the Olympics do not have anything near that uniting function in other countries, and that a lot of people don’t even know it is on.

For Norwegians the Winter Olympics is not so much an international competition but a one-country-show where we finally get the chance to shine. 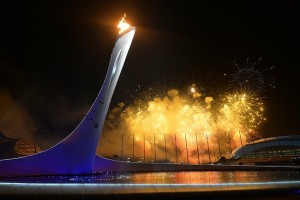 Opening of this years Winter Olympics in Sochi © www.kremlin.ru

In general, Norway is shamelessly forgotten and overshadowed by its neighbouring countries. Sweden has H&M, Ikea, Stieg Larsson and ABBA, Danish designers like Malene Birger and Bang & Olufson are hugely popular with stores all over the world.

Ask any average European person about what they know about Norway, and the answer would be something along these lines: “All Norwegians are rich,” which sadly is just not true, “It’s really cold there,” which is true but not something to be particularly proud of, or my personal favourite, “Isn’t Norway the capital city of Sweden?” to which the answer is NO, buy yourself a map you idiot.

But whenever there is a winter sport competition, it is our chance, our time to show off and prove that we are good at something. Just to be completely unbiased and impartial about it, for a country of five million people – half of the amount of people living in London alone – to have the most successful winter Olympics team of all time is quite impressive. Norway has won 303 medals since the games started in 1924, whilst the second best country, USA, with over 300 million people, has won 253.

This year’s Sochi Olympics has taught me an important lesson and pegged me down a couple of notches. Apparently, people don’t really care about the games. During the first couple of days of the competition I tried starting conversations like ‘Hey, how exciting was the 10km sprint yesterday?’ but quickly gave up when I understood the people I wasn’t talking to didn’t have the slightest idea what I was talking about.

From a quick investigation of British media this is quite understandable. The Guardian and BBC websites do have a tab you can press if you want to follow the games live, but the contest results are not posted on the front page as actual news. The only Sochi stories reaching that kind of attention are the Pussy Riot arrests and protests against Russia’s anti-gay attitude, and if you only read Mail Online, like most British people, you probably wouldn’t even be aware there was a Winter Olympic Games going on.

I have also learned, from having a Finnish flatmate, that the individual countries really only pay attention to the sport in which they are doing well. Finland’s Ice Hockey team usually does really well and make it to the finals. Norway’s team is pretty horrible – and I didn’t even know we had a hockey team until this year. When my flatmate asked me if I wanted to watch the Finland v Norway game with her, I was the one who didn’t know what she was talking about.

All this leads to a segregation which I think, frankly, is really sad and goes against the basic aim of the Olympics. Instead of uniting countries in a common interest and focusing the attention of the world on one thing, each country pays close attention to the sports of which they are successful and ignores those where they lose or don’t take part in. Growing up, I thought the games were all about skiing, because that’s all I would see on TV. When turning BBC on, I realised there was a Bobsleigh competition going on, which I’d never seen before in my life – and of course, Norway doesn’t have a Bobsleigh team.