THE alarming scale of phone theft in Dorset can be revealed today by The Rock. A Freedom of Information request to Dorset police shows almost 3,000 mobiles have been stolen in the last two years. 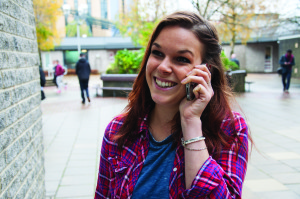 That is more than four every day - and police fear that this is just the tip of the iceberg.

Official crime statistics show 1,470 phones were reported stolen to Dorset Police in 2012 while 1,372 devices have been snatched already this year, or four phones every day.

The rising value of smartphones and their features have made
them an attractive target to thieves. Nationally, mobile phone theft has surged in recent years, increasing by 25 per cent since 2009.

Bournemouth University student Katie Pathiaki, 20, had her iPhone stolen last year on a night out in Bournemouth town centre.

“I went clubbing in Bournemouth and was having a good time. At the end of the night I went to call a taxi and tried to find my phone and it had gone from my zipped bag. I spoke to one of the bar staff who told me lots of phones had been going missing.”

received a crime number but I never got it back,” said Katie.

Police fear the true figures of mobile phone thefts may be a lot higher as many people fail to report their phone as stolen and simply splash out on purchasing an expensive replacement for their beloved devices rather than deal with the police.

Martyn Underhill, Dorset Police and Crime Commissioner, is aware of the scale of the problem and is “very concerned about mobile phone theft in Dorset”.

He urges members of the public to inform the police immediately if a theft does take place.

“It is very important that people who do lose mobile phones report it to the police, particularly since iPads and iPhones have track-my-phone ability, which means we can actually find the phone a few hours after it was stolen and help us to catch the offenders.

“Mobile phone theft is on my radar, it is on my agenda and I would ask people to report it as quickly as possible to the police,” said Police Crime Commissioner Mr Underhill.

Across Dorset there have been several high profile incidents reported to police involving mobile phone theft and muggings in recent months.

On September 19, police issued an appeal for witnesses after a woman who was involved in a traffic incident had her mobile phone stolen, as she lay injured and in pain at the side of Bournemouth town centre’s busy Holdenhurst Road in broad daylight.

And a 19-year-old Bournemouth man was held to the ground by two men and repeatedly punched in the face near Exbourne Manor on Christchurch Road at around 4.15am on Saturday August 31.

The offenders then subsequently stole the man’s wallet and phone as they restrained him on the floor following the beating.

February was the worst month for phone theft in Dorset this year, with 203 devices reported as stolen to police forces over the course of the period.

This prompted the police to announce a public warning on how best to avoid the growing problem of phone crime.

Dorset Police said people should avoid leaving mobile phones in baggy, loose pockets or a bag after several of the devices were stolen during a packed concert from Example at the Bournemouth International Centre (BIC).

On one day this year a whopping 41 phones were reported stolen to police compared to a high of just 13 on a single day in 2012.

Mr Underhill suggested that members of the public should be more aware of their surroundings when walking down the road holding a mobile phone to their ear or looking at the screen as these crimes are often carried out by opportunistic thieves.