Sensationalist stories of spiders and storms fill the tabloids 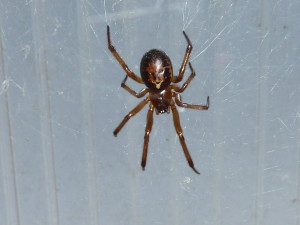 Batten down the hatches, they said. Remain indoors, they said. There’s a storm coming, they said, and it’s going to be on par with the hurricane of 1987. It wasn’t.

Now the lawn chairs have been righted, the gnomes stood back up with brand new fishing rods and the giant beach ball that was running loose around London has been burst. Left to reflect, it seems that the Great Storm of 2013 was yet another case of the news media blowing everything out of proportion only for it to turn out be a lot of hot air.

It’s almost identical to the recent media storm (snigger) around the invasion of our country by the eight-legged harbingers of death known as ominously as the false widow spider. Throughout the late part of the summer and early autumn, outlets such as the Daily Star and Daily Mirror have made it their mission to publish a daily horror story about the apparent effects of these horrific beasties.

The next, they’ve made a man’s leg explode, terrorised a baby or brutally murdered a beloved pet rabbit. Every single one of these articles has been emblazoned with words like “deadly”, “lethal” or “killer” as if they’re describing Hannibal Lecter, rather than a small, relatively docile arachnid. The point is that these spiders theoretically have the power to kill, and it is that makes them inherently newsworthy.

The storm could theoretically have caused destruction across the south coast of the UK, and that also gave enough value to hang the news agenda on for an entire 48-hour period. The false widow spider has been in the UK for well over a hundred years. In that time, no deaths have been attributed to its bite. Bearing in mind that wasp stings kill between two to nine people every year, this supposedly new threat suddenly doesn’t seem all that dangerous.

Like wasps, the false widow spider is only really dangerous if you are allergic to its venom, or your bite gets infected. A single bite is unlikely to kill you, especially if you are able to get medical treatment quickly or are blessed with a sense of proportion. The tabloids will whip up anything into a frenzy if it sells papers. As circulations go down at an alarming rate, equal and opposite desperation is forced to occur from editors. Killer storms and deadly spiders will always drag people to the newsstands and there is no law against sensationalism. Now that’s a kind of press regulation that I’d quite like to see.