BU fundraisers have raised hundreds of pounds for the typhoon survivors in the Philippines in just a few days.

Aaron Newbury, a 19-year-old Bournemouth University student,  set up a fundraising campaign in addition to SUBU’s own extensive efforts, in an attempt to raise interest. 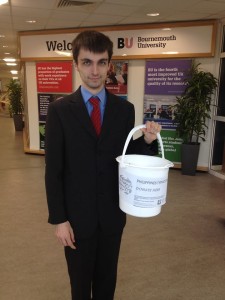 He was stunned by the response. Almost £700 has already been collected and more fundraising has been arranged for this week.

Aaron (right) said: “I set up a team of my own to collect donations, which will go straight to the Disasters Emergency Committee (DEC) after every working day.”

After contacting every society within the university, 23 different clubs and 16 individual students helped him promote the cause.

“I’m so impressed with the feedback we have received from a wide variety of societies.

“Members from the Islamic Society, the Feminist Society, the Conservative Society and the Atheist Society, just to name few are prepared to donate and do anything they can to contribute, which is great.

“The Performing Arts Society is hosting a showcase where all the proceeds are going to the appeal. They’ve all started to come out of the woodwork and begun to help.”

Alongside fundraising through bucket collections, Aaron has also approached SUBU, and the Student Shop to hand out flyers. Staff canteen ‘The Retreat’ has agreed to place donation envelopes on tables and student nightclub The Old Fire Station may be increasing it’s entrance fee by £1 to help.

“Lollipop is a very popular student night, and I’ve asked them to raise the ticket price from £3 to £4 - the extra £1 per person is donated to the Philippines,” said Aaron.

The suggestion is currently passing through the university and students will vote whether they are prepared for the one-off ticket price increase to go ahead.

Alice Ryland, 21, a third year, Communications and Media student is helping with the fundraising.

“I wanted to get involved because I don’t have a lot of money to give but by helping I could get other people to give money which will still make a difference,” she explained.

Aaron has pledged to continue to raise money for the cause until the Filipinos recover from the disaster.

Typhoon Haiyan struck the Philippines on November 8, destroying everything in its path. Recorded as one of the most intense tropical storms to hit anywhere in the world. The destruction left nearly a million people homeless, and thousands dead. The survivors of this devastation are now in desperate need of help.