A celebration took place at Bournemouth University on Friday to mark the first same sex marriages taking place in the UK. 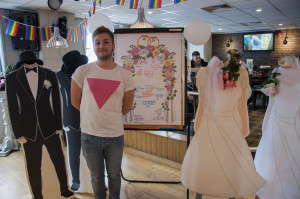 The event took place in Dylan’s Bar from 11am-3pm, and gave anyone the opportunity to be photographed with either two male or two female wedding attire cut-outs.

Pictures will be displayed on social media and in the new student centre when it is completed in Spring 2015, along with a message board with signatures and greetings from supportive students.

SUBU’s Welfare Council organised the celebration. LGBT officer Billy Wright said that this is an important step and that it “means a lot” to him personally, even though there has been a divided view on the bill amongst gay people.

“A lot of people within the gay community are torn in regards to civil partnerships and marriage, as divorce rates are really high anyway, and they say you do not need a certificate to validate your love for someone.

“But I compare it to segregation back in the 50s. Black people had to sit at the back of the bus and use different water fountains and toilets. Even though they had the same facilities to use, they were separated. It is the same with civil partnerships and marriage,” said Billy.

He contradicted the argument claiming that allowing same-sex marriage goes against the sanctity of marriage. Very short unions or multiple remarriages would also go against this sanctity, but this is still legal.

He said: “The fact that we now recognise that we are equal is so important for our own well-being.

“Gay males are six times more likely to commit suicide than heterosexual counterparts, despite the UK probably being one of the best countries to live in when it comes to gay rights.

“Tennessee just passed a bill to allow people to bully homosexuals on the basis of religious freedom. I just don’t understand how this can still happen in this day and age. So we still have a long way to go, and we are still going to fight”. 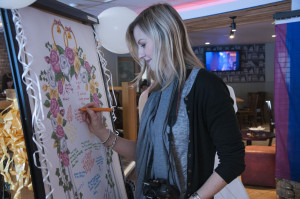 Annie Hall, VP Communications, wrote a message on the board to be displayed in the new student centre. © Hailey Hammer

Annie Hall, VP for Communications, was also present at the event and has been working on it for months.

“We wanted to celebrate what a great achievement this is for the community. We have been planning it since the LGBT history month in February and have been working to get it out on social media since then to raise awareness.

“By arranging these events, we hope to make it easier to be open about being gay, especially in areas where it may be particularly difficult like sports. Even though Bournemouth is very gay-friendly we could get better at preaching what we practice, to spread our message and get across to people,” said Annie.

Billy agreed that it is important to educate the public about LGBT people. He said he knew someone whose mother cried when her son came out as gay, saying she had all these hopes for him to be successful and get married, and now she thought he was going to get HIV and die.

“I think it is ridiculous that people still hold that belief in this day and age. And gay men are not allowed to donate blood, which really frustrates me. I would donate all the time but I can’t because of my sexuality. The legislation around it is ludicrous as well,” said Billy.

“Straight people are catching HIV at a higher rate than gay people because they don’t think about being safe. The only reason everybody thinks we are going to get it is because of the AIDS epidemic in the 80s, but we know so much more now.

“We need to educate people.”