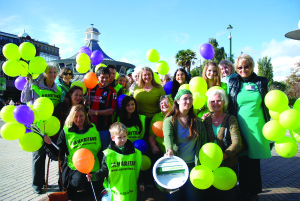 THE Samaritans have celebrated their diamond anniversary in Bournemouth.

To mark 60 years of success the charity went back to its roots and gathered volunteers to their local phone kiosk, symbolising the very first call answered by the charity’s founder, Dr Chad Varah, in 1953.

Branch patron Dr Andrew Mayers said it was an “absolute pleasure” to work with the charity. “It’s been a total honour to represent these guys who work so hard to relieve the stress of the people phoning all hours of the day and night.

“I hope in terms of the future that we are able to carry on doing the incredible work we do, both locally and nationally, and also because it’s an on-going thing that we are able to recruit more youngsters as well. One of our next aims is to have some recruitment fairs and get young people interested in volunteering for the Samaritans.”

The anniversary event was rolled out across Britain and went ahead in Bournemouth earlier this month. Samaritan volunteers from the area gathered at the phone kiosk on Avenue Road, carried on the festivities in Bournemouth Square and then finished at the local Samaritans branch on Durrant Road.

Bournemouth director Rose said: “It’s just nice to get out on such a lovely day and mingle with people because that’s what we want to do. We want to get out there and let people know t hat we’re there for them.”

Rose has been volunteering for the charity for over ten years, and took over the job as Director four months ago. She said:

“The wonderful thing about the Samaritans is that when everyone else is asleep, we’re still there at two o’clock in the morning. When you wake up and your world is falling apart, we’re still there,” said Rose.

In 1962, the first Samaritans shop opened in the area and still stands today on Durrant Road. The charity quickly established itself as part of the local community and is now one of the town’s most prominent and recognised charities, with over 100 listening and dedicated volunteers.

Marion Alborough has been volunteering for the Samaritans for the last 15 years. She said: “It’s amazing when you think how it started off. There was just Chad Varah, and now it’s developed and moved with the times.”