THE RIVALRY BETWEEN JAMES HUNT AND NIKI LAUDA WINS THE RACE BY STEALING HEARTS. 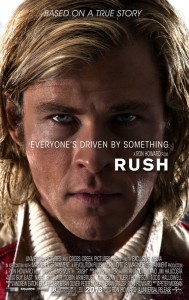 Rush, directed by Ron Howard is a heart-breaker, a truly nail-biting film, with the beautiful portrayal of the 1970’s rivalry between James Hunt and Niki Lauda.

The true story, based on the real depths of a rivalry between British James Hunt and Austrian Niki Lauda during the height of their careers. Delving into the personalities and personal lives of the famous racers and how the year of 1976 would change both their lives.

The genre brings diversity by producing a film that boasts the likenesses of its characters. Like Hunt; it is wild, sexy and fun!  like Like Lauda; it is intelligent, heart-warming and skilful. Rush could well be the best movie from 2013 (so far) with those features alone, BUT there is so much more.

Each scene is moving, exhilarating and fully packed with action. The famous crash scene is phenomenal; the Special Effects team made it all so real and drags the audience into the fatal reality of racing. The plane scene was not needed, but it did round off the themes of the film and revealed the types of people that Hunt and Lauda were.

A director like Ron Howard (Apollo 13 and A Beautiful Mind), you know the film will be served its well earned justice. He would not shy away from the real action of Formula One and its racers. With Rush, being a biopic of the lives of the two greatest race-car drivers, Ron Howard still leaves you with a thumping heart and chewed nails,  on the edge of your seat, wanting more.