Ritchie grateful to be back causing havoc

Cherries winger Matt Ritchie says he is thankful to Russian owner Maxim Demin for his scintillating start to life back in the Championship. 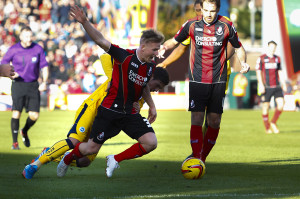 Matt Ritchie in action against Brighton on Saturday © Press Association

Ritchie scored his first goal of the season while making his first start for the club against Brighton last week and made an impact off the bench against Derby the week before.

The 24-year-old suffered the tear in his thigh after warming-up for Eddie Howe’s men against FC Zurich in the summer.

Ritchie was sent over 1,200 miles away, to Rome, in order to solve an injury that he picked up during pre-season in Switzerland.

“It is a clinic that is UEFA regulated and it is meant to be one of the top clinics in the world,” said Ritchie.

“The club have been great from the top, through to the manager, through to the physios - all of the staff have helped me to get me back as fit as possible and I appreciate that.”

The winger, who controversially moved from Swindon Town in January prompting his ex-boss Paolo di Canio to resign at the County Ground has impressed since returning and is hopeful such form can continue.

“I was little a bit rusty but hopefully I can build on my goal against Brighton and score a few more before the end of the season,” said Ritchie.

“It has been tough being out because I want to prove myself in the Championship.

“With the lads doing great, I just wanted to be a part of it so I am glad to be back fit now.

“It was frustrating not to start the season and kick-off from the end of last season personally.”

Ritchie has had to watch the Cherries falter in recent months with his side claiming just one win in ten prior to Bournemouth’s trip to QPR on Tuesday yet remains confident they have enough quality to impose themselves on the division.

“Everyone is aware we are not on a great run at the moment but you cannot always be on a good run - it is our first season in the Championship,” he said.

“We have showed this season we can definitely compete this season but we are in an okay position in this league and one or two wins can change things very quickly.”

“We want to be a top club so we need to compete with the Readings, Forests and QPRs in this division. We went to Burnley and got a good point and we have proved that we can compete so hopefully we will be okay,” he added.