The long-awaited ‘Rihanna for River Island’ collection will debut at London Fashion Week in February and it promises to be exciting for fashion fanatics and Rihanna fans alike. 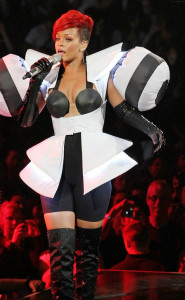 River Island’s excitement is understandable, as a partnership with the singer is a huge coup. With 22 top ten singles behind her, Rihanna is one of the most successful solo pop artists in the world. She also enjoys considerable notoriety for her on-again, off-again relationship with Chris Brown and posting risqué photos of herself on Twitter much to the delectation of her 27 million plus followers.

Given her immense popularity, it is unsurprising that Rihanna’s influence extends to fashion. BOY London enjoyed a 45% increase in sales after Rihanna wore one of their caps on the Jonathan Ross show. In addition, huge numbers of fashion blogs obsessively record her outfits. Whatever Rihanna may lack in formal design training, she more than makes up for in commercial appeal. Her River Island collaboration is a guaranteed moneymaking proposition.

With credentials like these, you almost don’t even need to worry about what the clothes will look like! Still, all signs point to a fun and covetable collection. To generate even more buzz around its collaboration with Rihanna, River Island recently released behind the scenes photos from the campaign photo-shoot.  Model of the moment, Jourdan Dunn, Aussie model, Bambi Norwood-Blyth and Autui Deng are shown wearing Rihanna’s signature style: denim hot pants, tiny t-shirts and Doc Martens. Ever one to tease her fans, Rihanna has also been photographed wearing a blue suede jumpsuit from the collection.

The Rihanna for River Island collaboration is beneficial for both parties. River Island’s partnership with Rihanna is sure to generate huge amounts of publicity, which will no doubt facilitate its expansion state side. Rihanna, too, will cement her popularity in Britain by giving fans an inexpensive slice of her style. So mark March 5th in your diaries and get in line!