A beautifully crafted love story between a man and his operating system. Maybe this is what lies ahead in our future. 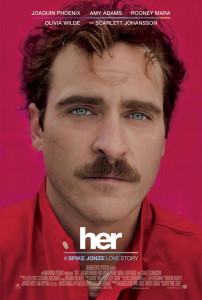 What lies in the future, is it a world where online dating is taking on a new form, where people actually date their operating system? Well, it is for Joaquin Phoenix’s Theodore, a lonely writer who’s divorce helps him find a new voice through his operating system, Samantha (Scarlett Johansson).

Her, a sweet-natured and beautiful film, manages to tell a story about falling in love with a computer’s well-developed software.

Joaquin Phoenix has the difficult task to carry the emotion, when he is talking to Samantha, as he is the only person on the big screen. My goodness, doesn’t Mr Phoenix deliver, his sensitive and perceptive take on the role is what the film is all about. As well, Scarlett Johansson delivers the feeling and reaction of any human being, just from her voice.

Spike Jonze (director and writer) brings out the essence of the film and every detail allows us to understand each character. He focuses on loneliness, love and being alive that lets the script become powerful. No wonder Her is up for Best Picture and Best Original Screenplay at the Academy Awards and won Best Screenplay at the Golden Globes. Her deserves every recognition it gets.

In the not-so-distant future where technology is not just a part of our lives but a fragment of us, we could one day be having a normal conversation with technology, creating a bond. Her just gives a glimpse of what such a bond could be like.

Her proves that not every sci-fi film will be about lasers, space or aliens, but the emotion between human beings and technology. If  the science-fiction genre is expanding the borders of societal, moral and psychological aspects of our human condition, then Her fits perfectly.

Her is a beautifully-crafted motion picture with a much deeper meaning that lies beneath the surface.