MORE than 150 staff members at the Arts University Bournemouth (AUB) are employed on controversial zero hour contracts, a Freedom of Information request has found. 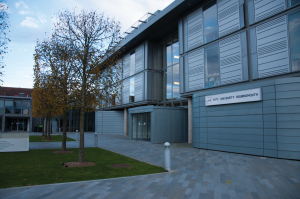 The UCU research revealed 53% of UK universities use zero-hour contracts, among them AUB © H HAMMER

But AUB has hit back, claiming the findings are “misleading”.

Arts University Bournemouth has defended the use of controversial zero hour contracts.

More than 150 staff members at AUB are employed on zero- hour contracts, a Freedom of Information request has found.

Data revealed by the University and College Union (UCU) shows AUB employs 153 staff on the contracts which have come under scrutiny in recent months.

Critics claim the contracts can exploit staff who may suffer financial uncertainty.

But AUB told The Rock that the findings were “misleading” and the contracts were only used for posts with “genuinely unpredictable workloads” such as visiting tutors, models, student bank workers and Saturday Art School assistants.

UCU investigated the issue after it was revealed the University of Edinburgh employed over 2,700 staff members on zero-hour contracts.

A former zero-hour contract employee from another UK University called for AUB to abolish the process. The employee, who wished to remain anonymous said: “It’s evident that it’s possible for universities to work without them. Edinburgh has recognised it needs to change and it is perfectly possible for institutions to plan our workloads better. It would be better for staff, better for students and better for education.”

She claimed she was left living “hand to mouth” after being given little notice of how many hours she was to be given.

UCU President Simon Renton said: “Their widespread use is the unacceptable underbelly of our colleges and universities.

“Employers cannot hide behind the excuse of flexibility. This flexibility is not a two-way street and, for far too many people, it is simply a case of exploitation.

“Without a guaranteed income, workers on zero-hour contracts are unable to make financial or employment plans on a year-to-year, or even month-to-month basis.”

But an AUB spokesperson said: “We are aware of UCU’s position regarding zero-hour contracts within the Higher Education sector  however zero-hours work differs greatly across different sectors and it is not the case that all zero-hour workers within the HE sector do not have employee status or employmenr rights.” He added that  AUB visiting tutors had permanent contracts of employment which gave statutory employment rights, comparable benefits and continuity of employment.

“Additionally, our experience is that these employees enjoy the flexibility afforded with such contracts as they often balance the work for the University with, for example, their own businesses.”

The spokesperson said AUB was not aware of any visiting tutors who were unhappy about their contractual arrangments or who felt exploited. “Furthermore the University has changed from issuing termly fixed term contracts to visiting tutors to permanent contracts. This change was undertaken after consultation process with our visiting tutor population and implemented with their explicit approval.” However an employee from another UK University, who also wishes to remain anonymous, said the contracts created a “system of apartheid in further education between zero-hour workers and those on secure contracts”.

“You have to work harder than those on secure contracts. You work in different offices. Rooms were given to the staff on secure contracts. Once you take prepping and planning into consideration you are working five days a week for only three days pay. The pay rate then works out as below minimum wage and you can be on poverty wages.” The survey showed Bournemouth University was one of 88 institutions who said they did not use zero-hour contracts.