Remembrance Day - Remembering the fallen of a forgotten war

Remembrance Day has come and gone, and though poppies were worn and money collected, the true impact of the day is lost on some of the younger generation.
The day was originally established to remember the fallen soldiers of World War I. A war that has become lost to memory and almost completely ignored by Hollywood in favour of World War II and Vietnam. 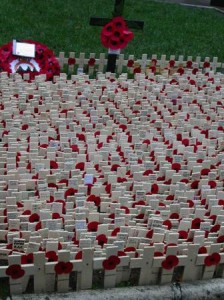 They enlisted to die over imperialist disputes in a war which certainly did not end all wars. The tragedy of this war must never be forgotten, and the men who gave their lives must not die as faceless names on the cold wall of a memorial, or as the nameless “Glorious Dead” on the side of a cenotaph. This year also marks the 50th anniversary of the United Kingdom’s involvement in the Korean War.

The fact that the UK was involved in this war comes as a surprise to most. 14,198 soldiers from the UK and Commonwealth fought in defence of the Korean people against Soviet agression..
For this act the South Koreans are eternally grateful, and it is one that the North will never forgive.
The ones who seem to have forgotten are the British people themselves.

The mournful truth is that thousands of soldiers who fought in that war and survived are now dying of old age. Some are forgetting the brave acts they performed - the battles in which they took part and the men with whom they served.
The Falklands, a conflict that took part in what is very much living memory, is incredibly misunderstood, and to a large number of the British youth it is completely unknown.

As Iraq and Afghanistan winds down, the men and women who served in these conflicts face an uncertain future under Army 2020 and other reshuffles of the armed forces. They too must be remembered and though it is important to support the veterans and soldiers of current wars and conflicts, those wars that have fallen out of vogue should not be neglected.