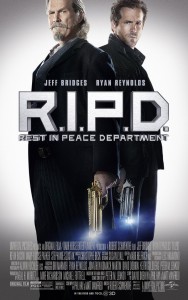 THE WANNABE SUPERNATURAL COMEDY THAT PROVES A PLEASING 90 MINUTE DIVERSION.

R.I.P.D. is a Men in Black wannabe with a great cast, who do all they can with absolutely nothing! No wonder it is a box office bomb.

R.I.P.D. sees copper Nick (Ryan Reynolds) being killed by his partner, Bobby (Kevin Bacon), and subsequently beginning his afterlife as part of God’s own police squad, “The Rest In Peace Department”. The film is a great idea; history’s greatest officers returned to Earth to bring justice and balance by hunting down dead criminals (called “Deados”) who refuse to leave the mortal realm.

Jeff Bridges and Ryan Reynolds are two incompatible cops who are partnered together to investigate a trail of gold stashed by the “Deados”. They TRY to bring charisma and comedy into the fold, but the actors COULD NOT not bring life to something that was not there to begin with… It seems the production of R.I.P.D. lost its way and was neglected by the screenwriters.

As R.I.P.D. was a comic-book series by Peter Lenkov, you would think that they would have more to work with… maybe not, just wasted promises and unused potential… R.I.P.D. DOES however, have its moments, and that is courtesy of Jeff Bridges as the out-spoken Wild West Marshal. With the resemblance of Ghostbusters (1984) and Men In Black (1997), the film is something that everyone has seen before and brings nothing new to the table, except a new cast and a new name for the undead.

R.I.P.D. is just a nice diversion to reality with bold 3D effects and blown up action.