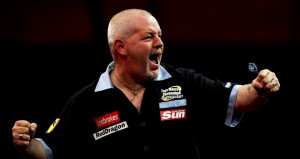 The ninth week of the campaign saw the players travel to the Welsh capital as Cardiff’s Motorpoint Arena played host to the hotly anticipated ‘Judgement Night’.

The players in the bottom two positions would be relegated after the evening’s matches and with Simon Whitlock already guaranteed to finish bottom, three players remained in contention for the second relegation spot: Wes Newton, Dave Chisnall and Robert Thornton.

In what could be seen as a straight relegation shoot out, 9th placed Wes Newton faced off against 8th placed Dave Chisnall. The loser would be certain of relegation whilst a draw would leave Robert Thornton needing to avoid defeat in the following match against Phil Taylor.

As the match begun, Chisnall started the much-faster of the two as he raced into a 2-0 lead after breaking in the opening leg. Newton responded well though with finishes of 87 and 90 to level the match and then continued the momentum to break the Chisnall throw again, after missed darts from his opponent, for a 4-2 lead.

In an understandably nervy affair, Newton then missed 3 darts at the double in both the 7th and 8th legs as Chisnall capitalized to draw level himself. Both players then held throw before, Chisnall stepped it up a gear just at the most crucial time to break for 6-5 before closing out the match and ensuring the relegation of Wes Newton.

This result meant Robert Thornton was safe regardless of his match. He was very fortunate this was the case as an ominously back on form Phil Taylor eased to a 7-4 victory. Elsewhere on the night, Michael van Gerwen narrowly avoided defeat to a resurgent and already relegated Simon Whitlock, as the Aussie saw his 6-2 lead be clawed back for a 6-6 draw. 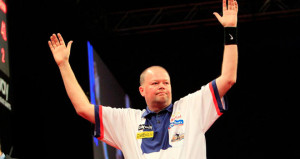 With the field whittled down to just eight remaining players, the focus of the campaign from here is getting one of the four play-off positions.

With both men still in contention to qualify for the play-offs, Taylor and Lewis played out a very close match in front of a brilliant Sheffield crowd. The opening stages saw both men hold their throw twice for a 2-2 scoreline before three consecutive breaks followed as Lewis led 4-3 and looked good for the victory.

The young man from Stoke had two clear darts for 5-3 but missed them both and Phil ‘The Power’ Taylor took out a brilliant 102 finish to level up in what turned out to be the pivotal moment.

With the momentum behind him, Taylor then held throw before checking out a stunning 144 to break. He then closed out the match with a 77 finish and leapfrogged his opponent in the table to enter the play off positions for the first time this season.

In another crucial match, second played third as Peter Wright faced Raymond van Barneveld and both came into the match with contrasting fortunes on the night. Wright earlier suffered a 7-4 defeat to Gary Anderson who averaged over 100 to reverse the result from the week before.

On the other hand, Van Barneveld emerged a 7-5 victor from a closely fought contest against Dave Chisnall.

Peter Wright claimed the opening leg to break after his opponent missed two darts at the double, but Barney responded brilliantly to break straight back with a 136 finish. An uneventful middle period of the match then saw seven consecutive holds of throw as the Dutchman led 5-4.

Van Barneveld then made his move; a 129 finish meant he broke the Wright throw, but then a poor leg let his opponent break straight back at 6-5. The match looked now destined for the draw but a timely good leg against the throw saw Barney claim his second win of the night and inflict Wright’s second defeat of the evening.

The remaining match saw league leader Michael van Gerwen do battle with Robert Thornton. The match begun with four holds of throw including an 11 darter from the Dutchman. It was Thornton who made the first move though as he broke the throw for 3-2 only to squander this advantage as a poor leg from the Scotsman let Van Gerwen break straight back. The world champion then continued the momentum with a hold followed by an 81 finish to break again and 5-3.

A thrilling response from Thornton followed though as the Sheffield crowd were agonisingly close to being treated to the first 9 darter of the tournament.  8 perfect darts had the crowd rocking with excitement only for Thornton to narrowly miss the double 12.

The Scot closed out the leg though for the break back and then levelled the match at 5-5 after van Gerwen missed 5 darts for another break. The Dutchman then held his throw and produced an unbelievable last leg, as he almost got the 9 darter himself after 7 perfect darts. He secured the 11 darter nonetheless and clinched the victory.

Next week sees the players head to Aberdeen as another crucial evening lies ahead.