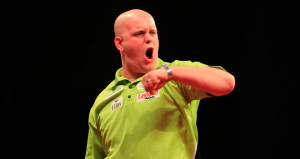 Van Gerwen was unhappy with his opponent in his 7-5 victory in Dublin. ©SkySports.com

In the penultimate night of Premier League Darts before relegation night next week, the players headed to Ireland as a crucial night of the campaign was contested in front of another huge crowd in Dublin.

The night saw some mouth-watering ties including the latest installment of the legendary rivalry between Phil Taylor and Raymond Van Barneveld. A rematch of this year’s World Championship Final also featured with the top two players in the league Michael Van Gerwen and Peter Wright facing off.

In what proved to be the match of the night, a hugely entertaining and a somewhat fractious affair between 2014’s in form players ended with Van Gerwen earning a 7-5 victory. The first four legs of the match saw four successive holds of throw including a brilliant 130 checkout from the Dutchman, before the fifth leg then caused the major talking point of the match.
Van Gerwen was left fuming after what he considered ‘disrespectful’ antics from Wright.  When Wright needed the Bull to finish a 161 finish, he stepped away from the oche and walked full circle behind Van Gewen to jeer up the crowd before missing the double. An angry and determined world champion then held his throw before racing to a 6-2 lead as he broke Wright’s throw twice and looked certain for the victory.  The Dutchman then had three darts for the victory but missed them all and Wright capitalized. ‘Snakebite’ was attempting to preserve his unbeaten record in the competition and he incredibly took the next three legs to force a decider with van Gerwen faltering. Wright looked like he was about to somehow salvage a point but an incredible 128 finish from the world champion dramatically claimed him the victory and extended his lead at the top of the league. 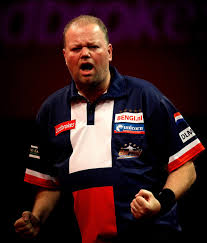 Barneveld was left to rue missed opportunities in his draw with Phil Taylor. ©SkySports.com

Phil Taylor v Barneveld
With 21 world championships between the two players, and their 2007 World Final considered the greatest game of all time, this was a hugely anticipated match up as ever and what ensued didn’t disappoint. A tightly fought contest saw both eventually having to settle for the 6-6 draw.  The match opened with two breaks of throw a piece followed by two holds of throw with Barneveld taking out a sensational 160 to level at 2-2. The Dutchman then maintained his momentum as he broke the Taylor throw once again after  ’The Power’ missed 3 darts at the double. ‘Barney’ then superbly checked out 121 in the following leg for 4-2 before both men held throw again for 5-3. Crowd favourite Barneveld, however then started to miss his doubles as he squandered darts to guarantee himself at least a point in the next two legs, with Taylor punishing him to level at 5-5. In an incredible 11th leg the Dutchman opened up with two 180’s but still lost the leg as Taylor brilliantly claimed a 6-5 lead. A good response from Barneveld in the deciding leg saw him claim draw but he will feel it was an opportunity wasted as Taylor meanwhile, guaranteed he can’t be relegated with the point.

In what was a crucial night for Newton, he had two matches on the night as he missed an earlier week due to illness and he was desperate for points as he attempts to avoid relegation next week. His first game of the evening  didn’t go to plan however as he was comfortably beaten 7-3. Despite claiming the first leg with a hold of throw, the man from Fleetwood then lost the next three legs as Scotsman Gary Anderson broke his throw twice.  In a crazy middle part of the game, neither man was able to able to hold their own throw with four further breaks in a row taking the scoreline to 5-3. Anderson was then finally able to hold with a 96 checkout before breaking again to secure the victory and distinguish any fears over relegation next week. 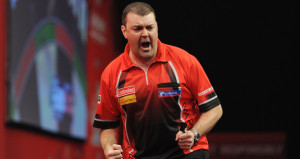 Wes Newton doubled up in Dublin but a disappointing night leaves him favourite for relegation. ©SkySports.com

Newton now desperately needed a good performance in his second match against fellow struggler Simon Whitlock and a gritty match saw both men unable to gain a much needed win as a 6-6 draw was played out. Bottom of the league Whitlock claimed an opening break of throw with an 80 checkout before being broken straight back as Newton hit a fantastic 11-darter. After the opening phase, both players were then solid on their respective throws as successive holds saw the scoreline advance to 3-3. The Aussie Whitlock then missed a dart for a vital break of throw in the 7th leg but responding well with two 180’s in the next to level once again. And this is how it stayed right to the end as Newton missed 1 dart to take the victory in the decider before Whitlock secured the draw. The result guaranteed that Whitlock will be relegated next week while Newton will face a battle in his next match to avoid the same fate.

Two of the most naturally talented and prolific 180 hitters in the game squared off here in what turned out to be a brilliantly entertaining and high quality match as another 6-6 draw was recorded. Chisnall who is very much in the relegation battle, broke in the opening leg but despite some ferocious 180 hitting, was pegged back immediately as Lewis checked out a great 124 finish. Both then held throw before Chisnall again broke the throw with a superb 11-darter. It was a similar story again though as Lewis broke straight back with an unbelievable 134 finish that ended with two double tops. Four holds of throw then followed which included a brilliant 158 finish from Chisnall and an 85 finish on the Bull from Lewis as the score reached 5-5. Both men then kept their composure on their respective throws to secure a deserved draw, in a match that was a pleasure to watch.

Next week is ‘Judgement night’ in Cardiff with one more relegation spot to be filled as Newton, Chisnall and Thornton are yet to secure their safety and another fantastic night of darts is inevitable.