Week seven of the Premier League darts saw a historic night for the sport as the First Direct Arena in Leeds played host to a great night of entertainment in front of a record crowd. 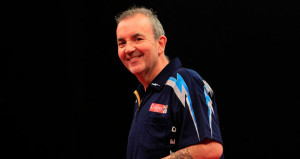 The Power looked back to his Thursday with a comprehensive win. ©SkySports.com

The venue held what was the largest ever crowd for a darting event and it ensured it was a night that will live long in the memory of darts fans.  The meteoric rise in the popularity of darts over the last decade was wonderfully encapsulated on the night with an atmosphere that would have been unimaginable back in the darker days of the sport.

In what has been a deeply troubled year thus far for the greatest ever darts player, Phil Taylor emphatically answered his critics with the performance of his campaign so far.  ‘The Power’ finally looked back to his brilliant best as he crushed Wes Newton 7-1. In what was a high quality match from both men, Taylor got off to a quick start as he broke the throw in the opening game of the match on his way to a 2-0 lead.

Newton registered on the scoreboard for 2-1 but Taylor stepped it up a gear, as he opened up with two 180’s in the 5th leg, which helped him claim another break of throw for 4-1. Taylor, who was finally looking composed on the doubles, didn’t look back from there and extended the score to 6-1. Despite then some edgy missed match darts, the Power eventually hit the winning double for a comprehensive victory and a fantastic 107 average. The 16-time world champion now moves up to sixth in the table after his third win in four. 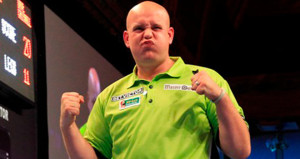 The newly crowned world champion won a close battle to move back to the top of the table. ©SkySports.com

Michael van Gerwen vs. Gary Anderson
The match of the night saw two of the most natural talents in the game go toe to toe in a mouth watering contest, which eventually saw the young Dutchman edge out his opponent for a 7-5 victory.  The opening stages of the match saw four holds of throw for a 2-2 scoreline as both men looked dominant on their respective throws. The first break of throw went to van Gerwen who took out a great 112 finish for 3-2.

A fantastic response from the Scotsman Anderson followed though as he hit an 11 darter to claim the break back. Both players were averaging over 100 as they continued to cancel each other out and the scoreline progressed to 5-5 after van Gerwen claimed a 121 checkout. The match look destined for the draw, but the Dutchman produced a brilliant late surge that highlighted why he is the world champion and favourite for the title. He broke the throw for 6-5 and then hit an imperious 11 darter for a victory that moves him up to the top of the table.

Raymond van Barneveld vs. Peter Wright
League leader at the start of the night Peter ‘Snakebite’ Wright relinquished the top spot as he claimed a 6-6 draw with the legendary Dutchman ‘Barney’, who was left wondering how he didn’t come away with the victory. Barneveld started the much better of the two as he raced into a 2-0 leader after an opening leg break of throw. Wright fought back though and levelled it up at 2-2 after the Dutchman missed darts at the double.

This trend continued in the next leg as Snakebite took a 3-2 lead after Barney again wasted chances to win the leg. However Barneveld was playing the much better of the two and finishes of 116 and 108 helped him take the next three legs for a 5-3 lead.  An even higher checkout of 156 saw the Dutchman brilliantly secure at least a point at 6-4. Wright though, determined to keep his unbeaten record, then held his own throw to force a deciding leg before taking out an unbelievable 161 on the Bull to somehow salvage a draw in a match that his opponent dominated throughout.

Adrian Lewis vs. Robert Thornton
In another closely fought battle, the recently in-form Adrian Lewis battled back to earn 6-6 draw with Scotsman Robert Thornton, who will also be disappointed he didn’t claim the victory in a match he was never behind in. A very lacklustre start from the two-time world champion Lewis, which included several missed darts at the double, saw Thornton take a commanding 4-0 lead, as the Scot already looked the favourite now to claim all the points.

However, a positive response from an ever-determined Lewis saw him half the lead to 4-2 after a 108 finish. Thornton, who was producing a much improved performance from last week, made it 5-2 and then had 3 clear darts to extend the lead even further but missed them all and Lewis capitilized for 5-3. Despite the Scot taking the next leg to guarantee at least a point, there was a sense of a momentum shift and Lewis won the next two legs to force a decider. A dramatic climax saw Thornton miss two darts for the victory and Lewis completed the comeback to claim a point. 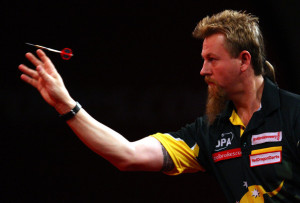 Struggling Whitlock looks favourite to finish bottom after missing out on a much needed win. ©SkySports.com

Simon Whitlock vs. Dave Chisnall
It was bottom of the table against third from bottom in what could be seen as a relegation battle. A similar match again followed as Chisnall, who was also never behind in the match, was left to rue missed doubles with Whitlock fighting back to claim a 6-6 draw. It was Chisnall who came out of the blocks the much quicker of the two as a 108 finish helped him to a 3-0 lead.  The Aussie, who really couldn’t afford another defeat, fought back to 3-2 though after Chisnall missed doubles in both legs.

The pair then exchanged breaks of throws in the next four legs as the scorline progressed to 5-4 before Chisnall produced a fine leg to make it 6-4. Whitlock however was not to be denied as he broke back again and then won the deciding leg to somehow snatch a draw from the jaws of defeat.

The players now head to Dublin, where another huge crowd is expected as we edge closer to relegation night in week 9.