This week’s premier league action came from the Capital FM arena in Nottingham where the players were raring to continue their campaigns after a busy weekend of darts. 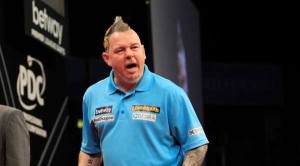 The first major tournament since the World Championships was held last weekend in the form of the UK open – known as the FA Cup of darts. 138 players battled it out over three compelling days of arrow throwing with the eventual winner being one of the Premier League favourites Adrian Lewis, who was in imperious form throughout.

Adrian Lewis vs. Gary Anderson
The highlight of the night saw the newly crowned UK open champion face off against Scotsman Gary Anderson. The two have history for huge matches with the pair meeting in 2011’s world championship and premier league finals, both claiming a win apiece.  So this duel was much anticipated and a mixed quality affair eventually saw Lewis continue his momentum as he claimed the victory.

After a comfortable hold for Adrian ‘Jackpot’ Lewis, both players then opened the second leg with 180’s to the hysteria of the crowd, before Anderson hit an impressive 11 darter to level the match. Jackpot then finished a 70 checkout for a break of throw and 3-1 as he looked ominously in the form he showed at the weekend.  However, in a dramatically sudden change of fortune, Lewis faltered with Anderson hitting back as he levelled the match at 4-4 after a break of his own. This looked as it would be crucial with the Scotsman then breaking again to take a 5-4 lead. But in what was the eventual pivotal moment in the match, Anderson missed two darts for 6-4, with Lewis capitalising for the break back to level the match. The match went all the way to the deciding leg and Anderson, unable to shake the previous misses out of his head, squandered another four darts at the double, as Lewis checked out for a valuable 7-5 win.

Peter Wright vs. Simon Whitlock
It was top against bottom here, with the league leader Wright a firm favourite to claim the points… and that is how the contest played out. Despite a crucial win from the Aussie Whitlock the week before, Peter ‘Snakebite’ Wright eased to a 7-3 victory to stay top of the table and leave Whitlock facing likely relegation in a few weeks time. The tone of the match was set right from the get go, with Snakebite claiming a break of throw in the opening leg. Wright then hit a sensational 132 checkout that ended with a Bullseye finish, which looked impossible after an earlier dart seemed to block the target. This led to a commanding 4-0 lead and, although registering on the scoreboard in the 5th leg, followed by a break back for 4-2, this was only a brief respite for Whitlock. Wright then took the following two legs for a 6-2 lead and despite a spirited 126 finish from the Aussie to extend the match, it only delayed the inevitable as the league leader closed out a deserved victory. 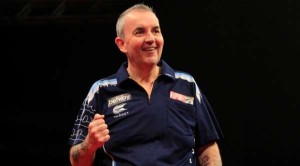 Phil ‘The Power’ Taylor claimed a much needed victory in Nottingham. ©pdc.tv

Phil Taylor vs. Dave Chisnall
The 16-time world champion suffered his fourth defeat in five games last week, which made this match a must-win and Phil ‘The Power’ Taylor. He emerged victorious after a nervy performance. Throughout the contest, The Power looked like his usual self on the scoring front which helped him to a 3-1 lead in the early stages.  However he was consistently let down by uncharacteristic lack of confidence on the doubles and after missing three leg-clinching darts, Taylor was broken back by the World number 5 Chisnall for 3-2. A good response saw Taylor immediately earn the break back on a nervy double three, only then to again be broken back after more missed darts at the double.  Further inconsistency from both men moved the score line at 5-5, before Chisnall missed two doubles of his own for what would have been a crucial break and Taylor capitalized to hold throw. The Power then produced a great deciding leg to break the throw on double 16 and was a mightily relieved man to have claimed a vital win that now gives him a great chance of avoiding the drop.

Michael van Gerwen vs. Wes Newton
After impressively opening with three victories at the start of the campaign, the newly crowned world champion Van Gerwen has since suffered a surprise defeat in week 4 and a draw last week, so a win in Nottingham was important for the young Dutchman and he emphatically obliged. Newton missed last week due to illness and he was powerless to stop a man in a determined mood as he suffered a 7-1 thrashing. Van Gerwen was imperiously quick out of the blocks as he powered into a 3-0 lead. Admirable resistance from Newton, who himself averaged over 100 for most of the match, was in vain as misses at doubles saw him broken again to trail 5-0. The world champion himself then missed darts at the double to allow Newton to get on the scoreboard at 5-1, But the a combination of power scoring from Van Gerwen and more missed doubles for Newton saw the Dutchman surge to claim a 7-1 victory, with a 105 average.

Raymond van Barneveld vs. Robert Thornton
With both men claiming draws last week, both were looking to get back to winning ways, but in a rather low-key affair, the points were shared again as a 6-6 draw was played out.  An uneventful first half of the match saw six comfortable holds of throw shared by each of them for a 3-3 scoreline. The next two legs saw both men have real pressure on their throws for the first time but composed checkouts saw two further holds for 4-4. The Scotsman Thornton then stepped it up a gear as he claimed the first break of the match, only for Barneveld to immediately respond as he hit double tops for the break back and 5-5. The match had suddenly turned unpredictable as a timely 180 followed by a double 12 saw Thornton break once again for 6-5. However the Scot then missed two match darts and van Barneveld capitalized to salvage a draw.

Next week sees the players head to Leeds where over ten thousand fans are expected to pack out the First Direct Arena.