This week’s instalment of the Premier League darts saw the players travel west to Exeter for another night of star name arrow throwing in front of a sell out raucous crowd in the Westpoint arena. 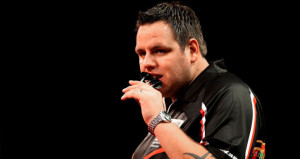 The night was headlined by the hugely anticipated dual between the two main young guns in the world of darts.  World champion and defending premier league champion Michael van Gerwen faced off against his great rival and two time world champion Adrian Lewis which in many eyes was a match too close to call.

Adrian Lewis vs. Michael van Gerwen
The pre match was as close as predicted, with the two matching each other blow for blow throughout. This eventually culminated in a 6-6 draw as they were unable to be separated. Though perhaps not one of their greatest matches in terms of quality, the battle certainly was up there for its drama. It was the young Dutchman who started the better of the two, as he raced into a 2-0 lead after a blisteringly quick 101 finish.However, after squandering darts for a commanding 3-0 lead, the world champion was pegged back to a 3-2 deficit as the man from Stoke-on-Trent roared into gear. This only seemed to motivate van Gerwen though, as he reeled off the next four legs with two breaks of throw as well a superb 11-darter to take it to 6-3. With the point guaranteed, it looked inevitable that the victory would be heading to the Dutchman. However, two impressive legs from Lewis ensured for a final leg decider. And after the Dutchman missed 3 clear darts for the victory, the former world champion capitalized to grab a point from the jaws of certain defeat.

Phil Taylor vs. Gary Anderson
After opening with three defeats, Phil ‘The Power’ Taylor earned a desperately needed win last week and he was hoping to continue his resurgence against the on-form Scotsman Gary Anderson; the pundits widely thought that’s the way it would play out. However 2011 premier League champion Anderson wasn’t paying attention to the script as he claimed a brilliant 7-5 victory. 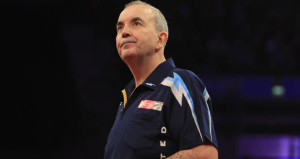 A cagey beginning to the of the match saw neither man able to hold their throw as four straight breaks led to a 2-2 scoreline. Anderson then raised his game and after crucial missed darts at the double from the Power, the Scot surged into a 5-3 advantage.

However, determined resistance from Taylor, desperately attempting to avoid a fourth defeat out of five matches, saw him take the match into a deciding leg at 6-5. It seemed that he would be rewarded for this battling spirit but after missing two match-saving darts, Anderson brilliantly checked out at 97 for the win and leave the 16-time world champion remarkably staring down the barrel of possible relegation.

Peter Wright vs. Robert Thornton
In what was the opening match of the night, league leader Peter ‘Snake Bite’ Wright faced off against Robert Thornton who was playing the first of his two matches of the night due to Wes Newton missing the night from illness.  In a match that set the tone for the evening’s darts, a high quality affair resulted in another 6-6 draw that could have gone either way.

An opening 180 with his first three darts helped Thornton break the throw and race into a 2-0 lead. Wright would not let that faze him though as he broke back to take the score line to 3-3 before hitting a brilliant 103 checkout to take the lead for the first time at 4-3. Snakebite then maintained his advantage to take a 6-4 lead and looked certain for the victory.

However Thornton was in a determined mood as he held his throw for 6-5. Wright missed one dart to win the match and then produced his best leg of the match, hitting a fantastic 11-darter to salvage the draw. The point nevertheless was enough for Wright to stay at the top of the table.

Raymond van Barneveld vs. Dave Chisnall
After a hugely impressive victory over the tournament favourite van Gewen last week, van Barneveld was hoping to continue his form against Dave Chisnall. However Barney never looked anything like the man that was on stage last week as he escaped with a draw after a lacklustre performance. In a scrappy affair, both men struggled to find their best and were level at 3-3 after the early stages.

A 13 darter from the inconsistent Dave Chisnall broke the throw for a 4-3 lead, only for Barney to break straight back after his opponent missed darts to take the leg. Back to back breaks again followed as the match was finely poised at 5-5 and the Dutchman produced a moment of magic to checkout 89 on the bullseye for a 6-5 lead. The deciding leg saw Barneveld miss one match dart before Chisnall hit double 10 to claim the point and for what seemed the fair result.

Simon Whitlock vs. Robert Thornton
After four straight defeats, Simon ‘The Wizard’ Whitlock was desperately looking for his first win as he propped up the table, and a much improved performance saw the Aussie claim the victory in yet another nip and tuck match.  After cagey early stages, Whitlock hit a sensational 150 to lead 3-2, but he was unable to continue the advantage as Thornton broke the throw for a 5-3 lead.

The Aussie wasn’t to be denied though as he levelled at 5-5 after hitting double tops. Thornton then missed double four to break the throw for 6-5, which proved costly as Whitlock held before hitting an 81 checkout to win the match. Despite still bottom of the table, the Wizard finished with a 100% conversion rate on the doubles and will feel he still has a chance to avoid the drop.

The players now head to Nottingham for week 6 in what is sure to be another thrilling night of darts.