We are now a few weeks into the 2014 Premier League Darts Campaign and we have already seen some amazing matches in front of huge crowds all around the UK. 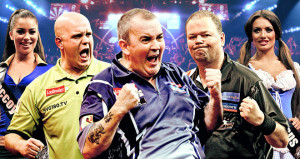 The Premier League features ten of the best players in the world who do battle over a 16 week league campaign. ©SkySports.com

After the spectacular roller coaster ride that was the World Championships in December, darts fans around the world were eagerly awaiting the start of the Premier League, which is one of the highlights of the darting calendar.

As the line up was announced at the start of the year, much controversy surrounded the decision to omit 2009 Premier League champion and 7 time major winner James Wade from the 10 man-strong field for this year’s stellar event. Nevertheless 10 of the best darts players in the world were ready to get their campaigns underway on the opening night of February 6th.

The opening night  of the campaign saw the players travel to Liverpool’s Echo Arena and it was headlined by a mouth-watering contest between the greatest darts player of all time Phil ‘The Power’ Taylor and the newly crowned world champion Michael van Gerwen.  In what was expected to be a ferocious battle that was too close to call, what materialised was anything but. A sensational display from the young Dutch pretender van Gerwen completely blew away an out of sorts Taylor, astonishingly inflicting the Power’s first ever televised whitewash defeat in his 26 year career, with a 7-0 victory.  Elsewhere on the night, two times world champion Adrian Lewis produced a fine display to cruise to a 7-1 victory over Australia’s Simon Whitlock. Legendary Raymond van Barneveld averaged a scintillating 108 to brilliantly sweep aside 2011 champion Gary Anderson 7-2. Debutant and World Championship runner up Peter Wright impressively emerged as a 7-3 victor over world number 8 Wes Newton and another debutant Dave Chisnall won a closely fought battle 7-5 over scotsman Robert Thornton.

The players next faced a trip to our very own BIC for a fantastic night of arrow throwing in front of a brilliant Bournemouth crowd. The main focus of the night was whether Phil Taylor could get back on track after the hammering he endured the week before, as he faced the formidable opponent of Adrian Lewis.  And it proved a similar story as another disappointing performance from ‘The Power’, saw him suffer a second successive crushing defeat as he went down 7-3, to the impressive Lewis, who recorded his second straight victory. 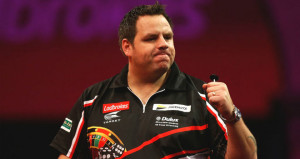 Adrian Lewis easily dispatched of Phil Taylor with a 7-3 victory in Bournemouth. ©SkySports.com

Tournament favourite Michael van Gerwen also made it two wins out of two with a tight 7-5 win over an unlucky Robert Thornton, ensuring he joined Lewis at the top of the table. Raymond van Barneveld suffered a dramatic change of fortunes as he produced a poor display in his 7-5 defeat to Wes Newton and an improved Gary Anderson comfortably triumphed 7-2 over Simon Whitlock. Elsewhere there was a scrappy 6-6 draw between Peter Wright and Dave Chisnall who both played way off their best.

The third instalment of this year’s campaign came from the Odyssey Arena in Belfast in what was an incredible atmosphere. The highlight of the night came from an unprecedented third straight defeat for 16-time world champion Phil Taylor who was left languishing at the foot of the Premier League table. Despite looking much better with an average of 101, he was defeated 7-3 to a completely unfazed and determined Peter ‘Snakebite’ Wright who beat Taylor for the first time in his career and in the process maintained his unbeaten record.

The form man in darts Michael van Gerwen continued his unstoppable run with a third consecutive victory, this time over Dave Chisnall who matched the Dutchman for much of the match before eventually losing 7-4. Whilst Robert Thornton produced one of the performances of the tournament so far with a fantastic 105 average to comfortably dispatch fellow scot Gary Anderson 7-2.  The other two games of the night saw an under-par Adrian Lewis suffer a shock 7-2 defeat to Wes Newton and Raymond van Barneveld got the better of an again struggling Simon Whitlock 7-4. 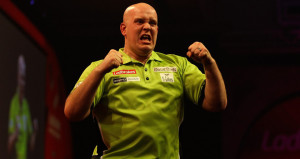 The players headed up north to the Hydro Arena, making its debut as a Premier League venue, which saw an amazing crowd of over ten thousand create an electrifying atmosphere. The fans were treated to a great night of darts with Phil Taylor finally securing his first victory of the campaign with a deserved 7-3 victory over fellow struggler Simon Whitlock. The undoubted match of the night was between the two Dutchman Michael van Gerwen and Raymond van Barneveld, with the far older of the two fantastically pulling off a surprise victory as Barney halted the steam train that is van Gerwen with a battling 7-5 victory.

Peter ‘Snakebite’ Wright capitalised on the van Gerwen defeat to move to the top of the Premier League table as the now only undefeated man was victorious 7-1 over a desperately out of sorts Adrian Lewis. Home favourite Gary Anderson earned a much needed 7-4 win over Dave Chisnall in a closely contested match while fellow Scotsman Robert Thornton played out a 6-6 draw with Wes Newton.

The players now head to Exeter for week 5 for what is sure to be another fantastic night.