Webster will be present at trainings and on all match days, both at Tatnam and away from home during term-time.

“Completing my degree as well as gaining experience is really important in order to break into the competitive sports industry,” he said. 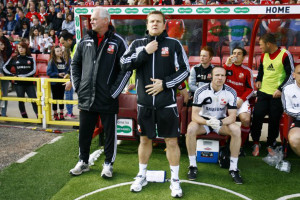 Poole will not be Webster’s first taste of professional sport, though. Webster witnessed Paolo Di Canio’s reign at Swindon Town and the 22-year old has a healthy chunk of experience from a short space of time.

“West Ham invited me to a one-off trial which went well and they asked me to come back once a fortnight for the rest of the season.

“It was brilliant to be able to get experience of a Premier League club with a first class set up and to work alongside players that you see on Match of the Day was a great honour.”

Webster secured a position at Warwickshire County Cricket Club, as well as at Swindon, during his mandatory placement year. Here, he was involved in a number of tasks from delivering conditioning programmes for players to performance analysis.

Webster insisted that working under the then Robins manager - the notoriously hot-headed Paolo Di Canio – was not the most challenging part of his placement year.

“The biggest challenge was getting used to the culture surrounding a professional club. At first I found it a little daunting because University does not teach you how to act around professional athletes.”

As for the temperamental Italian, Tom tactfully describes him as a “very unique, passionate character who cares a lot about football and has a win at all costs attitude.”

Di Canio resigned as manager of Swindon Town taking his coaching team with him and putting Webster’s internship in jeopardy. “Two first-team players became player managers for the week and I was asked by the new management team to act as interim head fitness coach while they found a full-time replacement.

“I was in charge of match-day warm-ups, hydration, nutrition and rehabilitation so I was really in at the deep end.

“Stepping out in front of a crowd is an experience I will never forget.”