Pedal down to see The White Bicycles

Indie/Electro duo The White Bicycles, from Falmouth in Cornwall, are scheduled to perform in Bournemouth in December. 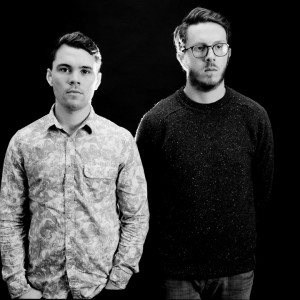 After meeting while studying Popular Music at Falmouth school of art, songwriter Matthew Howes and guitarist Ryan Nolan initially set out to write electro-acoustic arrangements for Matthew’s lyrically focused narratives. However, frustrated by the saturation of the nu-folk market, they quickly developed a distinctive sound; layering Matthew’s poetic and melancholic lyrics with ambient electric guitar melodies and sparse drumscapes.

In just one year, The White Bicycles began to gain momentum with their first notable release; ‘Courtesy’. The song earned the band a place in the Glastonbury Emerging Talent Competition ‘Longlist’ and was described by judge blogger ‘Crack In The Road’ as ‘A wonderfully well rounded track, poignant, touching and heart-warming’. The band began to make further festival territory also performing at Relentless Boardmasters Festival and Asahi Mojo Rising.

On the 29th of November, The White Bicycles will release a collection of songs entitled ‘Volume 1: Elegy’. ‘Volume 1’ was written over the past year and recorded by talented Producer Beren Matthews. The 5 track set signifies a further shift into the electro sphere for the band. Their sentimental vocals and dream-pop inspired guitar weaves remain intact, but backed by stylised beats, inspired by unlikely influences Frank Ocean, Drake and Lapalux. 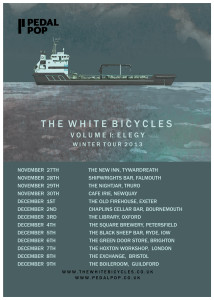 To support the release of ‘Volume 1: Elegy’, The White Bicycles will embark on their first tour of The South of England visiting Bournemouth during the two week stint. The tour will be the band’s first string of performances with multi-instrumentalist Jack Curnow; whose live duties include electronic percussion, backing vocals and glockenspiel (often all at the same time).

The White Bicycles provide an energising vibe which you may find yourself hooked into. The band will be at the Cellar Bar in Bournemouth on the 2nd December, come down and see for yourself the refreshing change of pace they deliver.

For more information you can visit:

Keep an eye out for our exclusive interview with the White Bicycles soon!