Lecturers at Bournemouth University have staged another strike in their ongoing dispute over cuts to their pay in real terms. 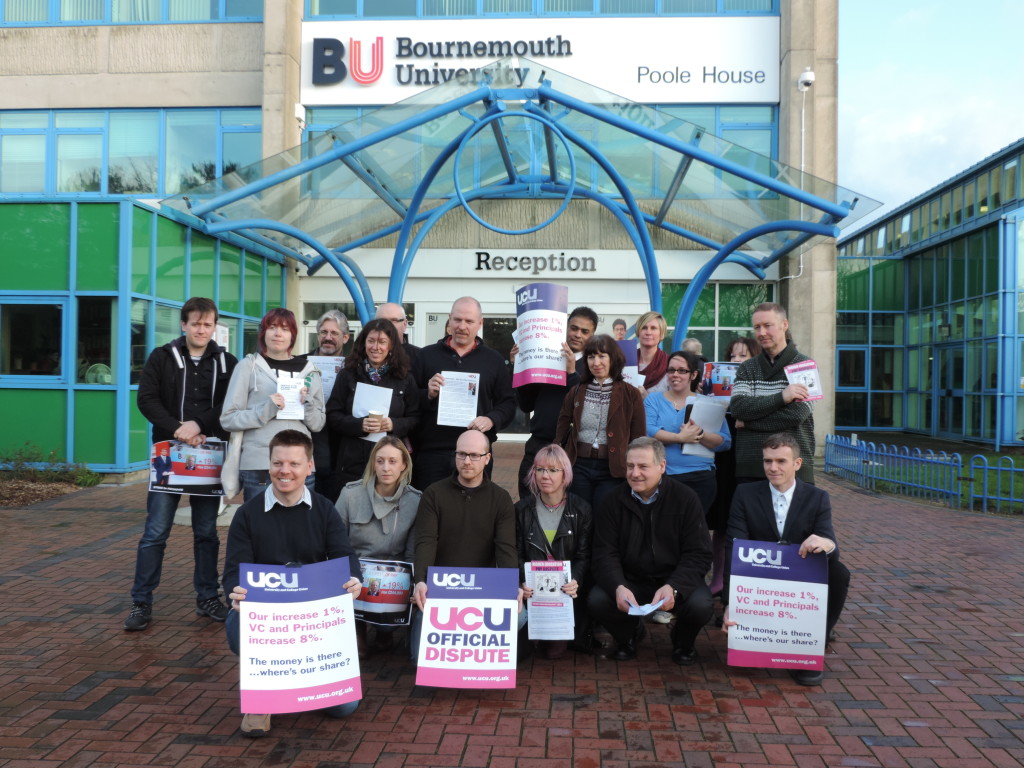 Members of the University and College Union (UCU) at Bournemouth University are protesting about the unequal and poor salaries they claim to have been receiving in the course of the last four years.

Protests locally have been fuelled by the recent news that Bournemouth University’s Vice Chancellor, John Vinney, received a 19% pay rise in 2013, when lecturers have had their pay cut in real terms by 13% since 2009.

John Brissenden, Chair of the UCU at BU and a leading figure in the strikes, said: “A lot of people are still unaware of this industrial dispute happening and the cuts to our pay over the last four years.

“We need to start seeing hard-working, professional staff being properly rewarded at a time when we’re all trying to work harder to make Bournemouth University better for our students and for people who work here.”

Lecturers previously took strike action in 2006 and also conducted an assessment boycott, leaving some students concerned over whether they would be able to graduate.

Mr Brissenden said: “That was the only time in the last ten years when the national employers have done anything other than cut our pay.”

Following the recent pay rise, John Vinney’s salary package is £244,000 according to the UCU. The reported salary means that Professor Vinney is the highest paid public sector boss in Dorset.

The UCU also claims recent construction developments at the campus are at the expense of pay increases – a point disputed by the University.

The new Student Support Centre at the Talbot Campus is set to cost over £10 million and there are plans to construct another building on campus at a cost of £22 million.

Mr Brissenden suggested that these investment plans are at “the expense of staff pay” and that higher tuition fees are being spent on buildings instead of on “the people who you see every day who are involved in university life.”

He said the increased fees helped “make up for the loss of income from other sources”.

He added that the new Student Support Centre “is going to be a fantastic building” and “will improve the student experience”.

The gender difference now stands at 17%, which Mr Brissenden says is “ridiculous”.

Staff are furthermore campaigning to protect those at the university receiving the lowest pay, who Mr Brissenden said were “feeling the 13% pay cut particularly acutely”.

Lecturers have organised two-hour strikes and have been handing out leaflets at the Talbot Campus to inform students and other staff of the situation.

Three strikes of two hours have already taken place during the first two months of this year.