Oz: The Great and Powerful Review

THE WORLD OF OZ IS GREAT BUT NOT POWERFUL!

Oz: The Great and Powerful is one of many movies who have tried to build from the earlier success of The Wizard of Oz. Disney in 1985, made a dark sequel called Return to Oz and Gregory Maguire’s (an exploring prequel) novel Wicked, that turned into a hugely successful stage musical. 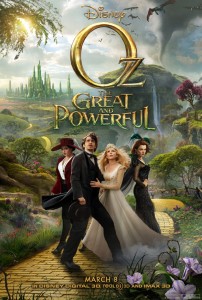 Oz: The Great and Powerful is about Oscar Diggs (James Franco) who is transported to Oz in 1905 and is recognised to be the wizard that will defeat the wicked witch! The sisters Evanora (Rachel Weisz) and Theodora (Mila Kunis) send him on a deadly mission to save the realm from the witch and in doing so, he meets Glinda The Good (Michelle Williams), a china doll, a flying monkey and the famous “Munchkins”.

The epic start to the movie is classic and somewhat reminiscent of its predecessor: the whole black and white effect to display Kansas in the 1900s. Not to mention when Oscar is swept away in his hot-air balloon (via the twister) and transported into the 3D world: the enchanted and colourful Oz.

The cast here, are stepping away from their typecast roles and playing characters that they are not usually associated with. James Franco’s Oscar Diggs is potentially a hateful character, but Franco is always seen as the druggie or misfit and not a heroic wizard. Mila Kunis’ Theodora is wavering and naïve witch, but Kunis is always seen as Meg from Family Guy.

Michelle Williams’ Glinda is brilliantly righteous witch, as Williams is always associated with adult-themed films and it is nice to see her in a child-friendly film for a change. Rachel Weisz’s Evanora is elegantly villainous witch, but Weisz is always seen as the responsible and good-natured character, so seeing her in an evil role is refreshing!

Finley (Zach Braff), the sympathetic monkey, as always with Braff’s characters, is comical with charismatic characteristics. China Girl (Joey King) is sweet and innocent and empathetic but she also has an amusingly dramatic attitude.

* SUBBER NOTES:
This at times proved difficult to read with phrases like ‘slightly not powerful’ among others that I cannot name off the top of my head because they were half a dozen mistakes ago. This review, at times felt rushed, in comparison to all the others, which I thought were GOOD, so don’t get me wrong. But I think your reviews could stand to be proof read by YOU first before saved for subbing. Please bear this in mind.