Even if you get into that top law firm, and even if you feel accepted by your better-paid male colleagues, chances are you will run into some old school sexism after all. 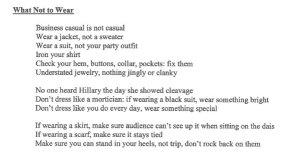 Clifford Chance needs to join us in 2013 ©TUMBLR

The same happened to the female lawyers working at the American office of law firm Clifford Chance. They received a 163-point memo called ‘Speaking effectively’, friendly telling them to avoid showing too much cleavage and dressing inappropriately, to stop giggling and to learn ‘hard words’. “Think Lauren Bacall, not Marilyn Monroe” and “No one heard Hillary the day she showed cleavage” was part of the advice given.

And if you are a good girl, wear black to make sure not to reveal anything that might upset those poor male colleagues. They also nicely add that you should not “dress like a mortician” either. It is not that I do not think women should dress appropriately for their job, but I would assume that educated lawyers, most of them working there for a longer time, already know not to show up at work in their party tops and short skirts.

They do not need a patronising memo to tell them, unless it would include some notes that guys should not come into the office wearing shorts or speak about football too much. “Think Don Draper, not Homer Simpson.“