Aronofsky’s Noah puts a new spin on a well-known story.

Diverting heavily from the biblical tale, Noah probably won’t please the most devout of the Abrahamic religions, but despite this, it is a strong film in its own right, and will bring the tale to a new audience. Noah (Russell Crowe) is a devout man raising his sons Shem, Ham, and Japheth as vegetarians, respectful of the world and the Creator.  One night, he is awoken by dreams of a vast flood, destroying the world and killing people.

Not understanding what is happening to him, Noah takes his family on a journey to visit his wise grandfather, Methuselah (Anthony Hopkins). Along the way, they adopt a young girl, the lone survivor of a mass murder. 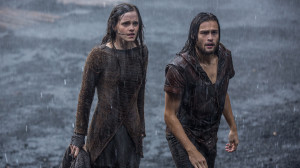 Years later, Noah has almost completed the Ark, with the help of fallen angels and his growing sons. The young Ila (Emma Watson) has become engaged to Noah’s eldest son, while his younger son Ham (Logan Lerman) is jealous of their love.

A nearby king (Ray Winstone) learns of Noah’s Ark, and plots to take it for himself and his people. Noah becomes disgusted with the violent behaviour of humans, and decides the Ark is intended only to save the innocent creatures of the world.

Noah is not a peaceful film – it is at times violent and dark, as Noah struggles to interpret his Creator’s intentions and his family comes to terms with the death of the world around them. Russell Crowe gives a daring portrayal of a flawed biblical patriarch, fighting to survive while allowing those around him to die.

Emma Watson steals her scenes as a young girl desperately trying to please the divergent wishes of her father and her husband, and Jennifer Connelly excels as a wife trying to serve a husband she cannot understand. The sweeping backdrops and special effects are both harsh and beautiful – vast amounts of water flood the scenes that only a moment ago were beautifully designed and intricately animated.

The film is thought-provoking and unsettling, questioning a story everyone thinks they know, and expanding on it for entertainment’s sake.