Speaking at Bournemouth University on Thursday night, Ian Dunt, the editor of Politics.co.uk, made the compelling case that the Internet can do the opposite of what we expect, and rather than bringing us closer together, is effective at shutting down free speech. 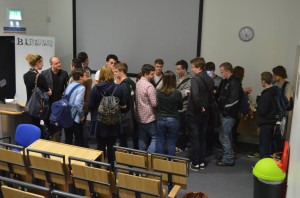 Humans do not like to be challenged, and so in the face of maximum choice and endless possibilities presented to us by the Internet, we increasingly choose to cocoon ourselves in the familiar.  When we stop listening – there is a risk. It is the first step towards rejecting those who are ‘not like us’.   When we stop listening to things we don’t like, we stop engaging in the arguments.  We shut them down rather than taking them on – ‘we play the man and not the ball’.  And then the worst thing happens that could possibly happen in a liberal society…someone calls the police.

“New Challenges to Freedom of Speech Online” amounted to a masterclass on Free Speech Literacy.  A catalogue of the tried and tested, centuries-old methods used to silence the arguments that we don’t want to hear, that have migrated to are amplified by our digital world.  These are the tactics employed every day, effectively, invisibly and mostly unchallenged.   And there are consequences for us all.