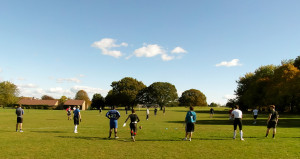 The programme, a joint partnership between SUBU and Sport BU, has allowed five sports who were previously part of SUBU’s Clubs and Societies to achieve Varsity status.

Representatives from three of the sports involved spoke to The Rock about the impact the new programme has already had on their club:

Charlie Anderson, coach of the Bournemouth Bobcats American Football team said, “Being part of Sport BU has forced us to be more professional. Last year it was more of a social sport, we had good athletes on the team but we didn’t push ourselves as hard as we could.

“So just the status of being an affiliate team of Sport BU has given us the ethos that we have to be professional because we want to improve the team, we want to get better and we want to beat every opponent that we face.”

Mark Shepherd, captain of the Bournemouth Heat Ultimate Frisbee team said, “As a club we are very proud to be affiliated with Sport BU via the new SUBU Sport programme. The partnership acts as a stamp of credibility for the club. People who join know they are becoming part of a Varsity level sports team and can therefore expect a successful experience both on and off the field.”

It is not just Varsity accreditation that the clubs receive however as Mark explained.

“Being part of Sport BU has also allowed us access to the BU sports hall on a weekly basis which helped us take three teams to the BUCS Indoor University Open Regionals in Bristol last month.”

“A key thing with the SUBU Sport partnership is that clubs are able to take advantage of free strength and conditioning sessions.

All three of the sports teams we spoke to agreed that being part of SUBU Sport had a significant positive impact on this year’s recruitment.

Clive said: “Because our annual membership fee is higher than that of other clubs, our members are constantly looking for value for money and being part of the partnership gives us exactly that.”

“We hope that with the facilities and support provided by Sport BU we can compete at higher level at the main BUCS tournament this year.”