The scene was set in the beautifully decorated ballroom of the Royal Bath Hotel, which was covered in sparkling lights with a huge Christmas tree in the entrance, ready for the Bournemouth University’s Christmas concert.

The room filled quickly with a crowd of people of all ages waiting to hear the sounds of Bournemouth University’s big band, orchestra and contemporary choir.

The Big Band started the evening, looking very smart and Christmas themed in their colour co-ordinated red shirts, they opened with a cover of the upbeat Dynamite by Taio Cruz, followed by an arrangement of Africa created by their pianist, Luke. They also had Olivia on stage to sing Peggy Lee’s Why Don’t You Do Right which added something different to the performance. As well as including some favourite Christmas songs such as, Winter Wonderland and Jingle Bell Rock. 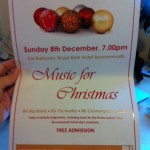 Then the contemporary choir took to the stage with a harmonised version of Taylor Swift’s I Knew You Were Trouble and then they sung Ed Sheeran’s reworking of No Diggity and a song from the musical Once, called Falling Slowly which sounded magical alongside the rooms resonance.

Kirsty Workman who sang in the choir said: “it was a successful evening, each performance went well and it was fun for all involved.”

The vast orchestra then played beautifully twice, both before and after the interval with a mixture of string and wind instruments, their dynamics worked really well and they played a great ensemble. This was followed by the choir preforming a ‘mash up’ of songs which included Let Me Love You Down by Usher, Rihanna’s Rudeboy and California Girls by Katy Perry. Then the choir sang a semi-acapella version of Fix You by Coldplay, which sounded really emotional.

The Big Band then came back on stage and performed quite a few songs to get the audience dancing, including Nora Jones’s Don’t Know Why, Lovely day, Rocking Around The Christmas Tree and So Here It Is Merry Christmas.

The night wouldn’t have been what it was without all the comparing done by The Big Band’s conductor, Steve Hayes, who brought the evening to life with his humour and audience participation throughout the night.

The show ended in a festive way with a Christmas medley from the choir, band and orchestra all playing together, and even the audience were having a little sing song too. The evening was received well with a good selection of songs and genres, it did well to show off some of the talent from Bournemouth University as well as creating some great entertainment.