Nearly as good as its predecessor but the sequel left us wanting more, like something was missing. 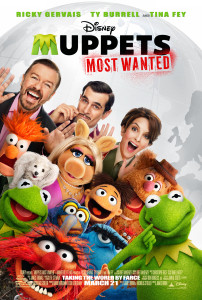 Muppets Most Wanted is the eighth film in the Muppets collection but is the sequel to The Muppets (2011) and while it has not reached the spectacle heights of its predecessor; it still packs a punch with its clever gags, catchy songs and celebrity cameos.

The Muppets gang go on a global tour, selling out grand theatres in some of Europe’s most intriguing destinations, including Berlin, Madrid, Dublin and London. Mayhem begins when they find themselves unwittingly entangled in an international crime caper headed by Constantine (the World’s Number One Criminal) and his sidekick aka Number Two (Ricky Gervais).

Muppets Most Wanted is a sequel that left us wanting more. Many of those involved in The Muppets returned, including director and co-writer James Bobin, co-writer Nicholas Stoller, songwriter Bret McKenzie and The Muppets (with newcomer Walter), but something was missing.

The celebrity cameos were one of the best parts of the film, even though they were cheesily placed, they brought laughter. With faces such as Tom Hiddleston, Christoph Waltz, Selma Hayek, Saoirse Ronan, Lady Gaga, Tony Bennett, P. Diddy and many more.

Even the Muppets gang, who were cool and funny in their prime, had moments of weakness when it came to some of the plot sequences and a few of the songs felt forced.

The human cast: Ty Burrell as Jean Pierre Napoleon and Tina Fey as Nadya portrayed funny characters and the actors themselves looked like they had fun. While Ricky Gervais, who can be funny half the time, felt a bit too lacking in the menacing department to be a villain.

Muppets Most Wanted is a fun and entertaining film for all the family, even though there is something missing. The Muppets themselves knew: “everybody knows the sequel’s never quite as good” (lyrics from We’re Doing a Sequel song).