Every year, thousands of university students dive into the excitement of student housing head first without any thought about what they are actually putting their money into.

We can all be naïve, deceived, and end up with a bad deal – no matter how street-smart we initially think we are. 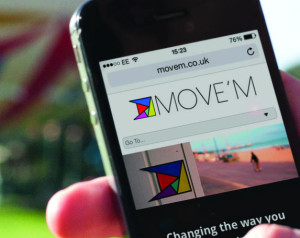 Landlords of student housing know students are less experienced when choosing houses.
There have been horror stories in the past from around the whole country where landlords have manipulated students by unfairly taking deposits and hiding problems with the house, or adding in hidden costs that the students weren’t made aware of.

Previous student Pete Ramsey came up with the idea for Move’m in June 2013.
It came about when he received a letter from his estate agents informing him that he and his group of housemates were losing their £750 deposit due to “worn grass”.

He said: “They never answered calls, or returned messages. It was a horrible experience that angered me enough to try and come up with a solution.”

After learning that the landlords had pulled a similar stunt on the previous tenants, Pete attempted to post a review of the house somewhere on the internet to warn future occupants.
There was no such website where he was able to post so he decided to build one himself.

Move’m is a platform through which students can share their experiences of particular student houses, and warn others about houses, landlords, and estate agents, or even recommend landlords who have provided a high quality level of service.
The website enables users to submit reviews of their experiences in student housing in three quick stages: a bit of information about the user, basic details of the house, and then the review.

Move’m also provides a “relocate” platform.
“Relocate” is a way for users to directly contact other students if they want to move out of their current house, or if they have a spare room that needs letting out.
Because of its easy accessibility and comprehensively designed website, Move’m has had 1.4 million page hits since its launch this summer and is now getting around 20,000 hits per day.

Students approach Move’m daily with feedback on the website, sharing their experiences, with one student stating that the site has changed the way she looks for houses.
Ramsey said: “We’ve been in a lot of contact with the estate agents, who have put more of an emphasis on support.
“We think this is because they know there is now a consequence.
“Whether they live up to their promise this year, we will have to see.”

The website started with houses and estate agents in Bournemouth, and the Brighton branch of the website was launched on November 18, 2013.
Move’m plan to open the Southampton site in February, so who knows where they will go from there?

Hundreds of thousands of students in the UK suffer from the horrors of student housing throughout the academic year.
With Move’m’s popularity already sky-rocketing in less than a year, it’s likely that the site will be in demand in many more regions of the UK sooner than we think.